Involve in the live games, rather than watch only.
‍
Taunt is an interactive streaming product enhancing E-sports fans' viewing experience. I designed and launched it with the team during my summer internship. We raised $4.8M in seed funding round.

Pick, predict, and Taunt your way to the top.
‍
Taunt is the best way to watch esports: a game that challenges you and your friends to compete against each other (or the rest of the world) during live matches. We have launched it in the App Stores in early September 2018

The problem we aimed to solve

E-sports fans were crazy about watching the live streaming of the game they are playing. While watching, they loved predicting based on their knowledge of the game and players and wished to show off in front of the other fans if they made a correct guesses. They wish to have more interactions with the game itself and the other fans while watching.

Insights from the user research done by the team

Gamers predicted a lot with their knowledge of games while watching the lives. Yet, they could seldom actually show off in front of others fans.

Gamers want to play rather than just watch games. They wish to get involved in to the live game.

Fans wished to share their excitement and convince the others that how well the teams they supported played.

My role and experience in this startup

Designed to bring hundreds of audience into live Esports game interactively; Fulfill the gamers' demands of competitiveness and excitement, as well as business potentials

Collebrated with UX and cross-functional partners; Pitched to CEO & the team

Worked closely with experienced colleagues with various backgrounds; Made each design process based on user research, perspectives from the team, business potential and feasibility.

We launched the product in the late August. It recieved positive feedback and earned 300+ new ysers within the first week.

Challenge 1
3 months only, from concepts to the launched product 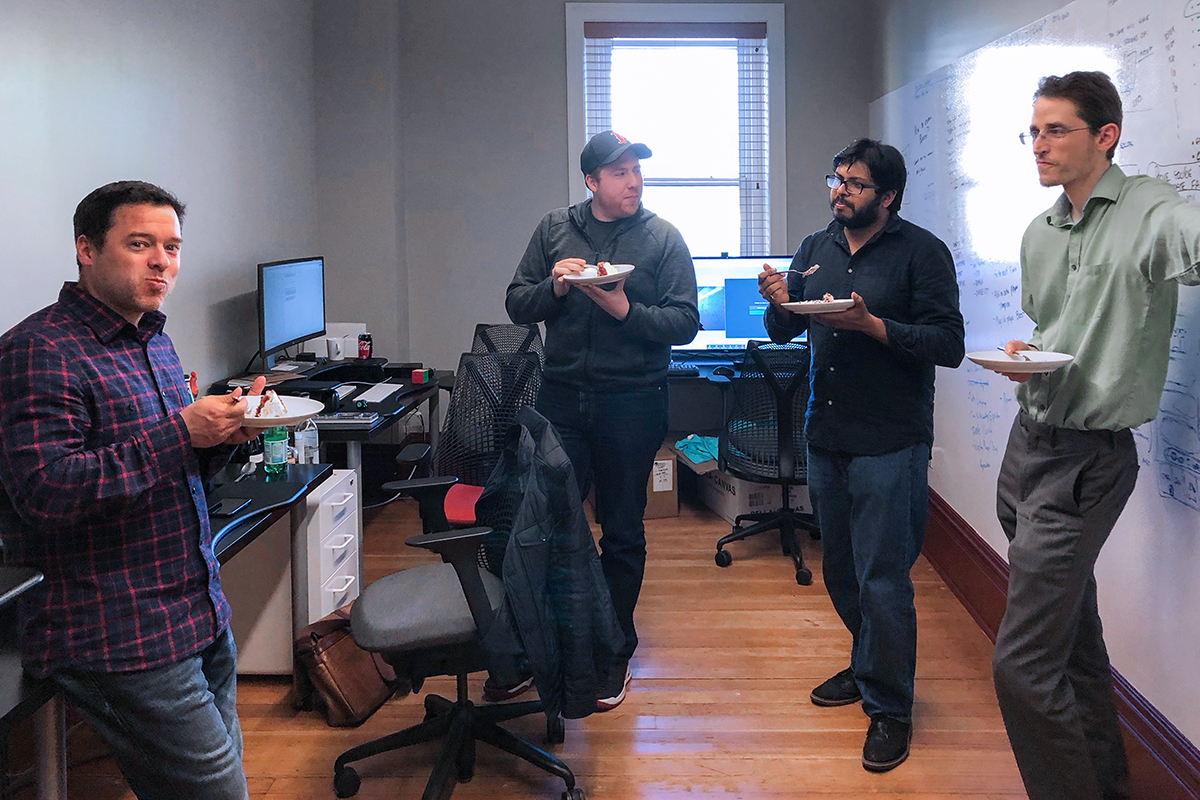 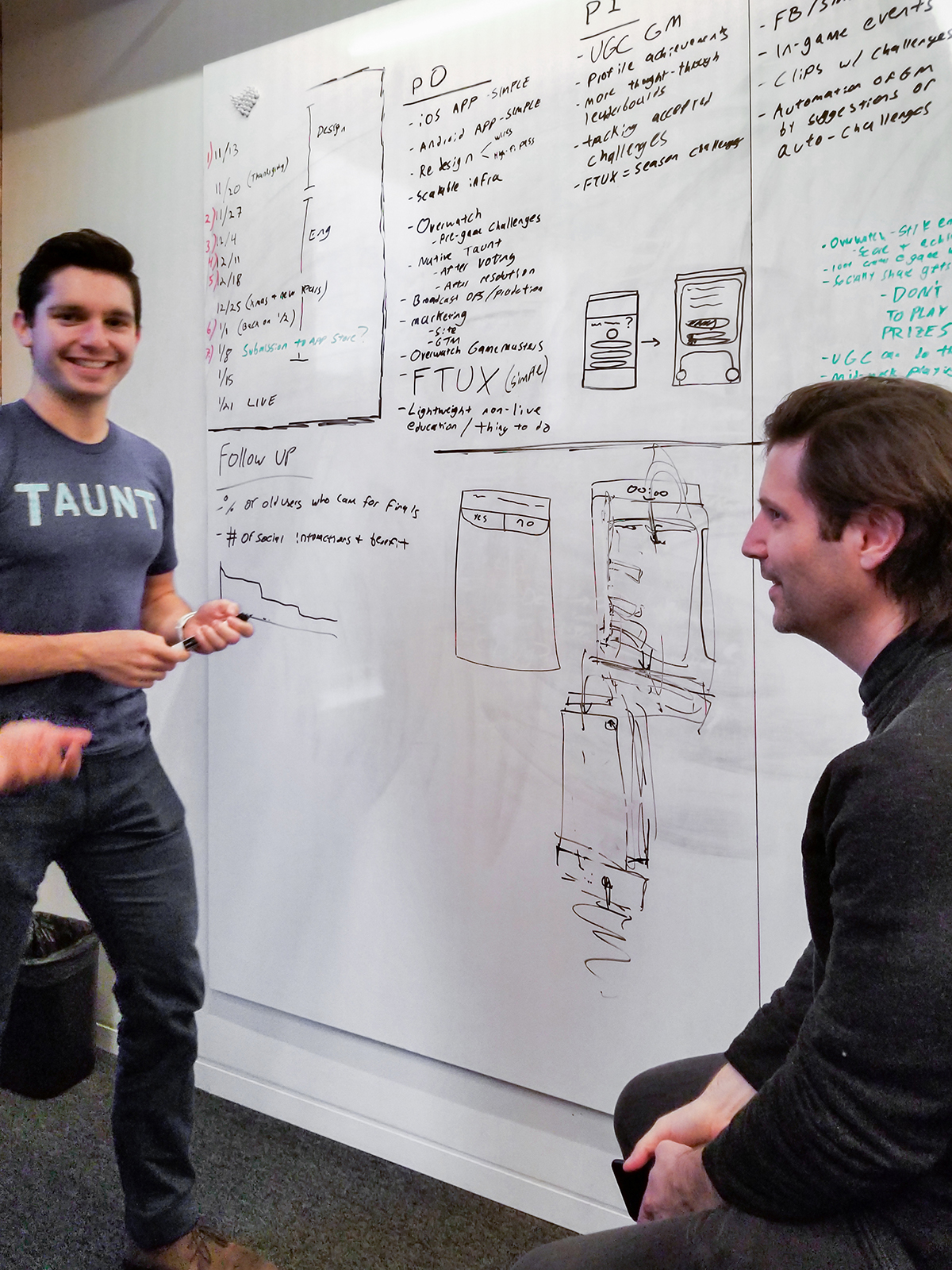 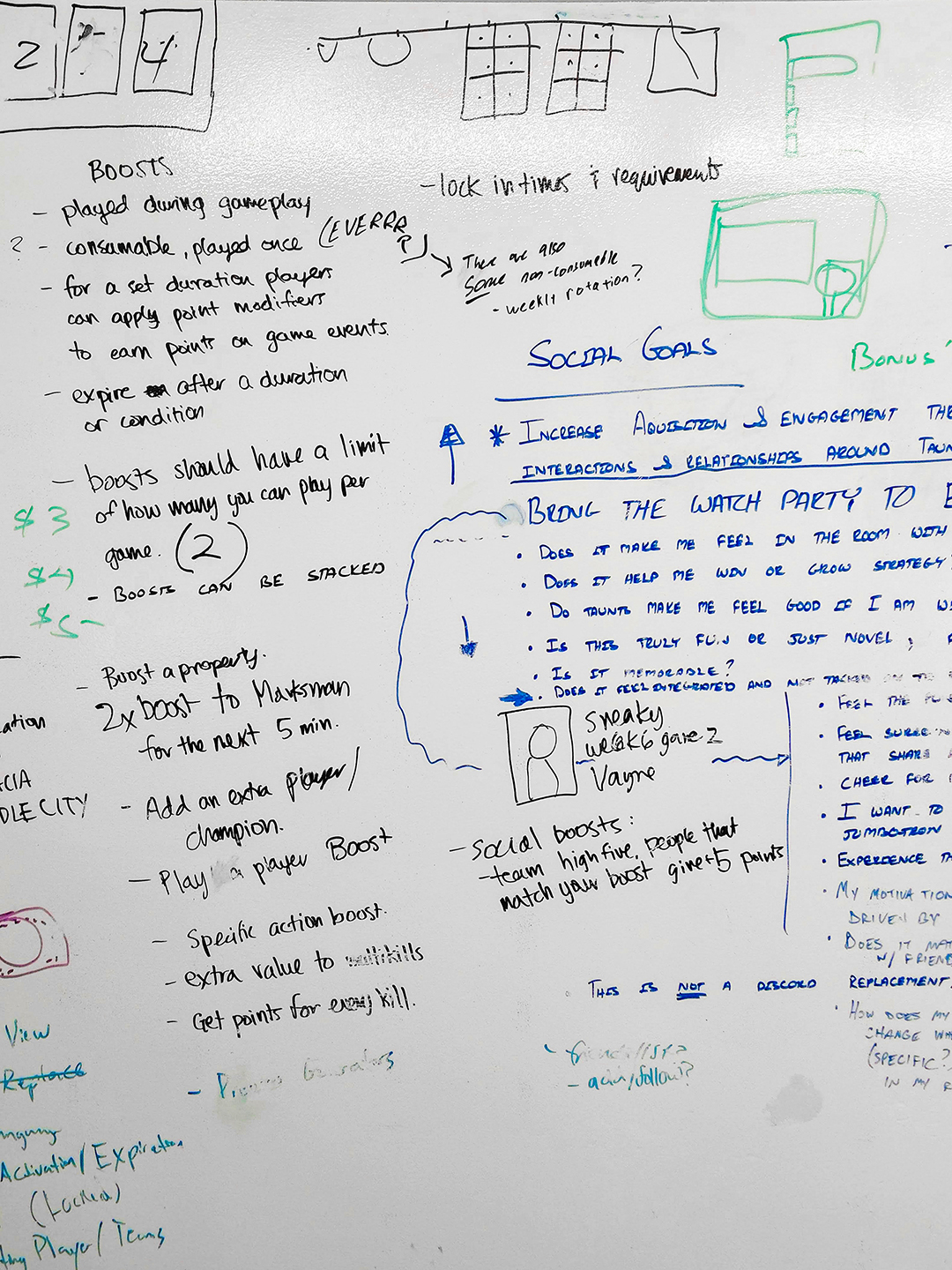 As a fast-growing startup, we started every day with a standup meeting. We used it to summarize the previous tasks and made sufficient plan for the following day. Everyone brainstormed and pitched ideas together. 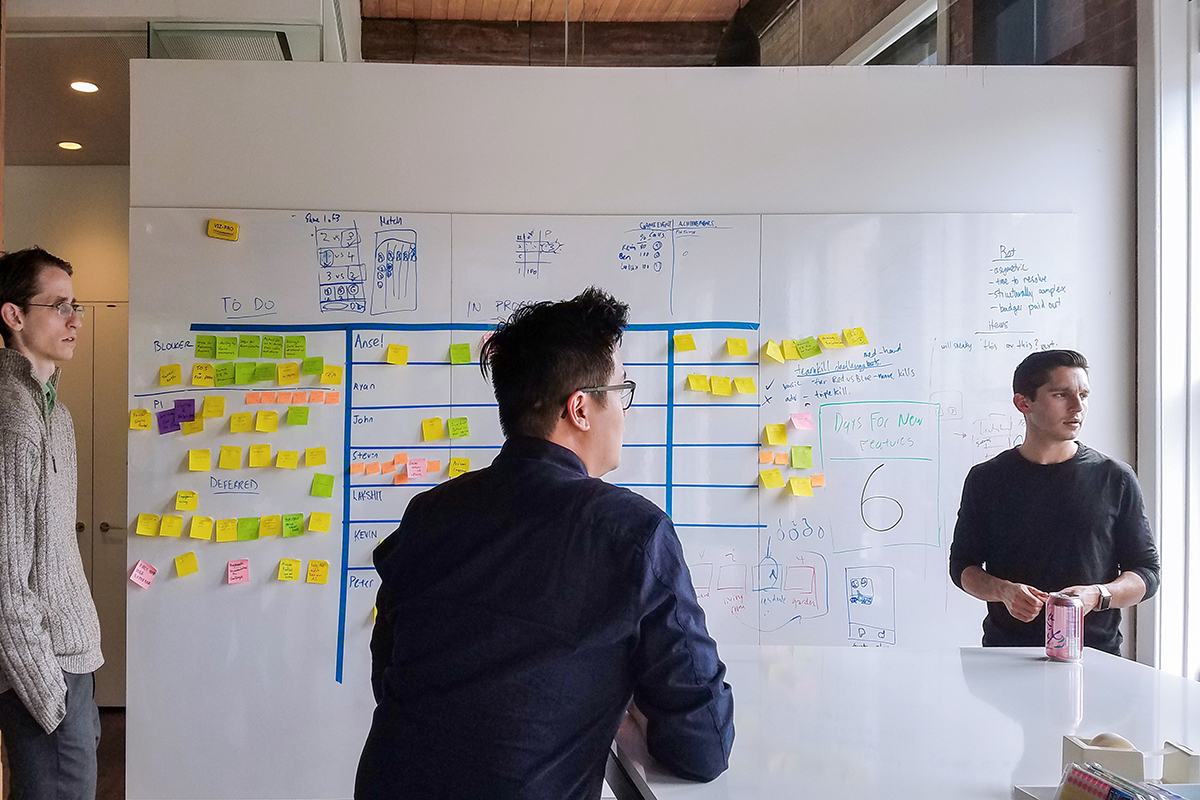 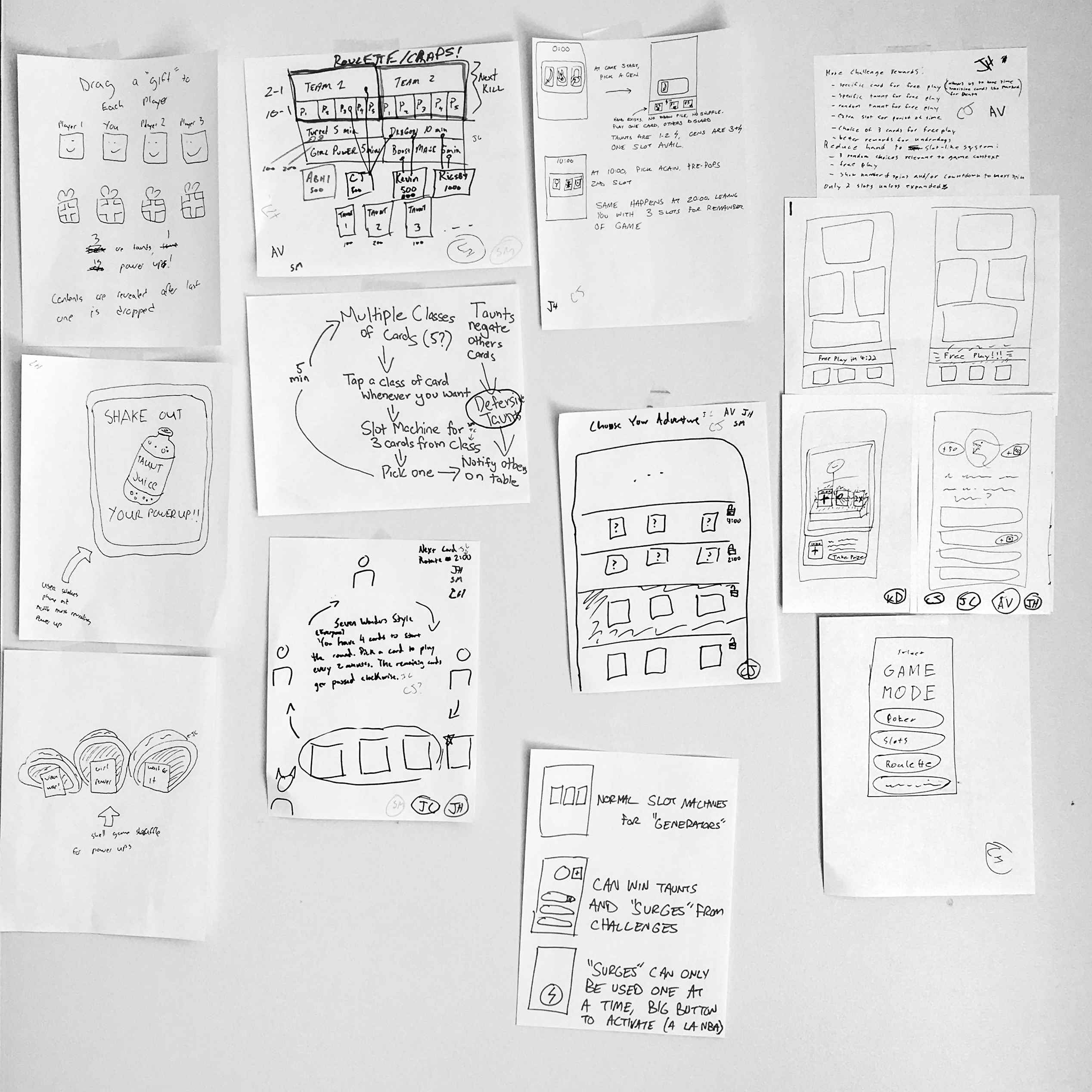 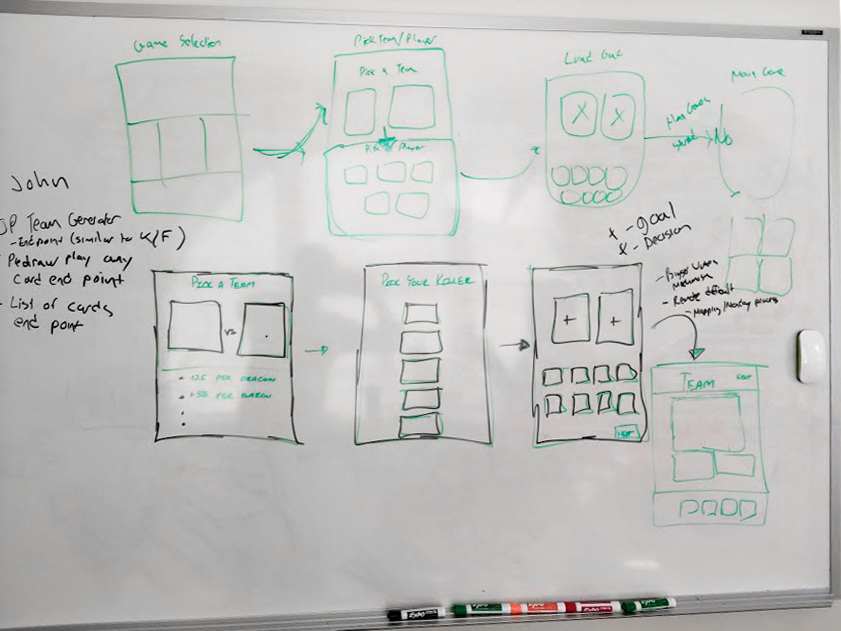 After narrowing down the initial ideas, we made two to four design variations with fast iterations and made multi-fidelity prototypes by Wednesday. Then, the engineers involved more to build demos for the play tests on Friday. 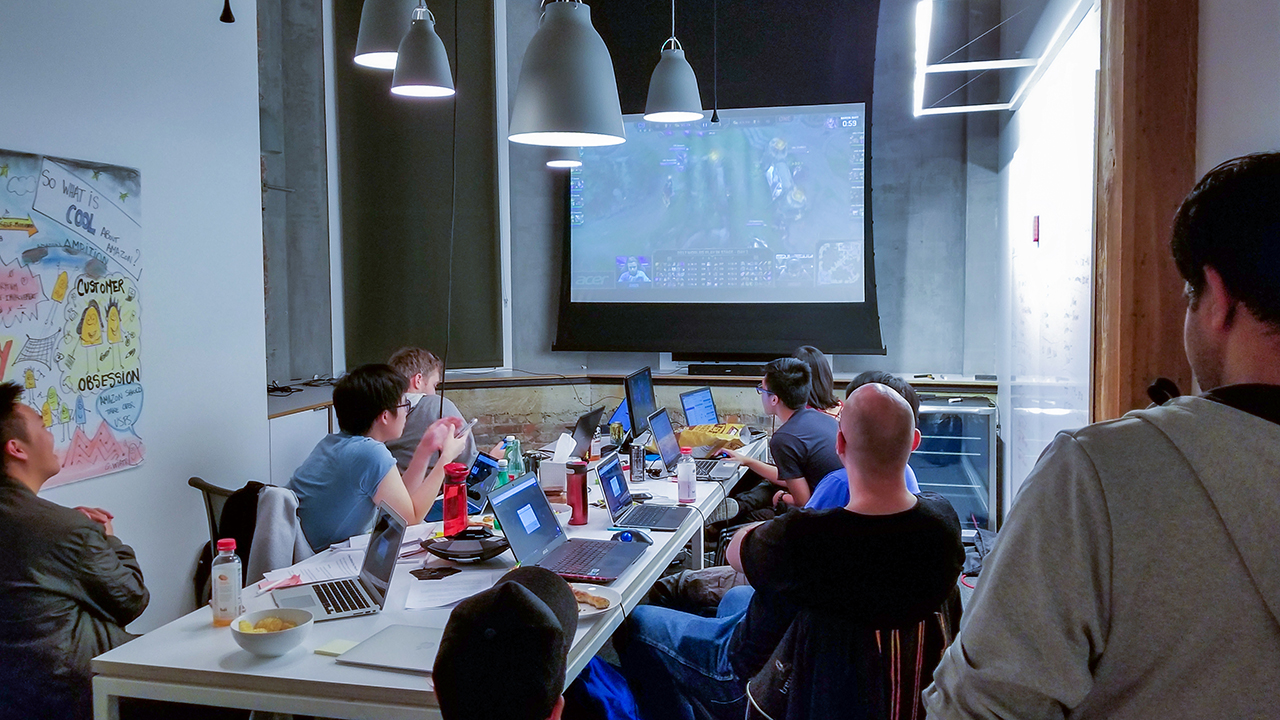 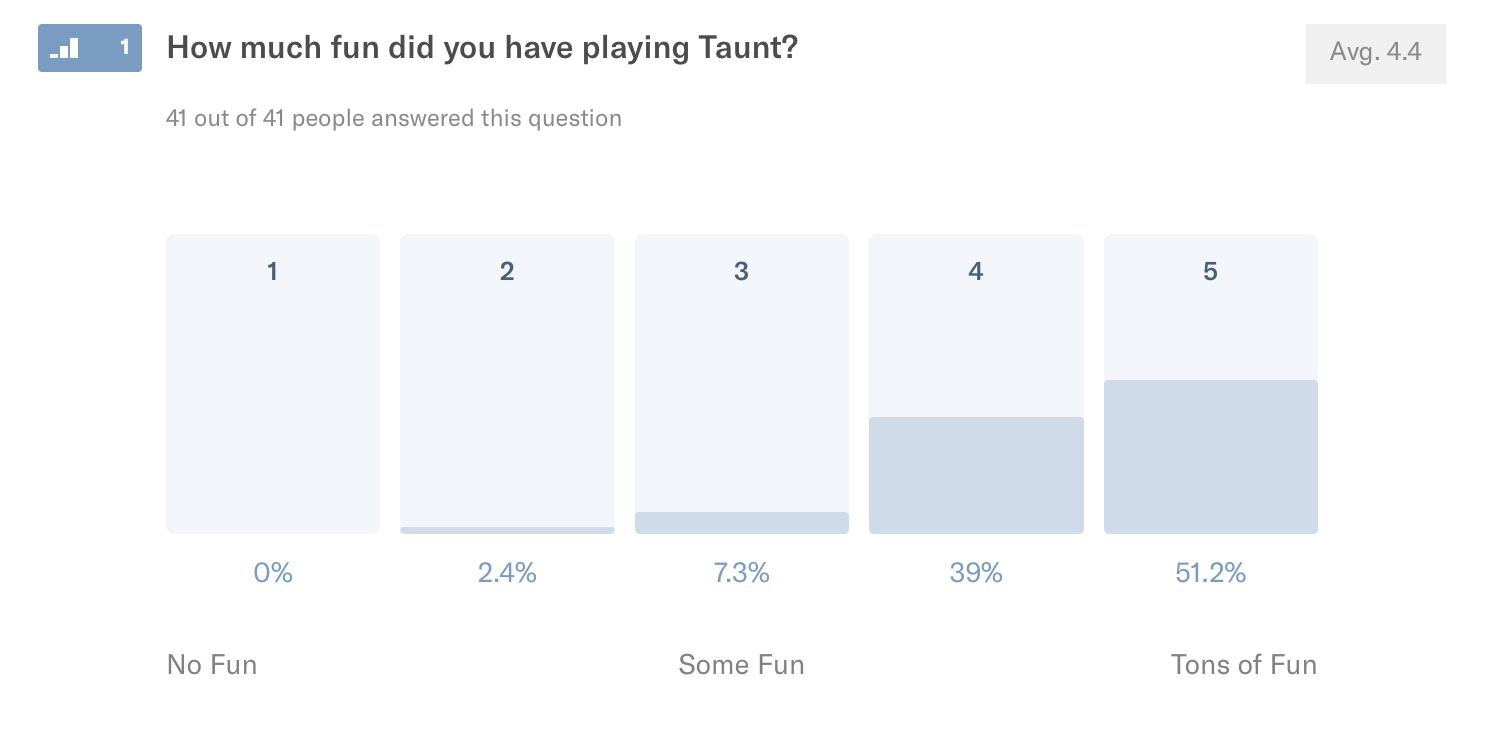 Every Friday, we used half of a day to do some usability tests and A/B tests with participants. We collected their feedback and analyzed insights for the refienment. Then, we applied the whole cycle again and again until the product launched.

Among all ideas, we finally chose the card game mechanism for the sake of best balance between the game experience & feasibility. We used rotating "poker-game-style" interface to allow all players to play against everyone in an easy and clear way.

Except from making the clear mobile UX for gamers, I also designed the big screen UX design for the gamers to show off and fulfil their demands of competiveness. Such brought the experience even more interactive and exciting. 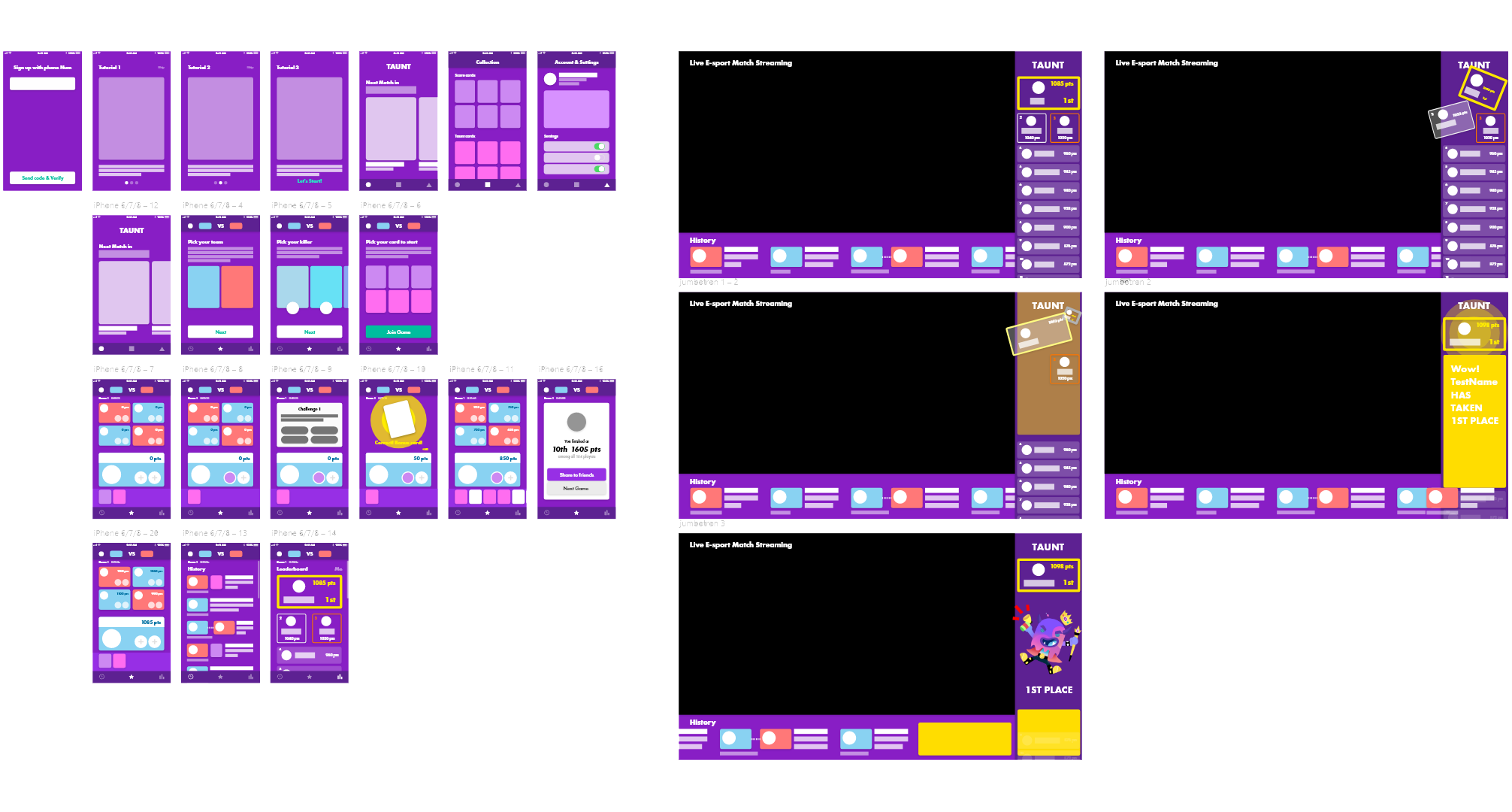 During the test, players stated that they would love to express their emotions during the "battles" and feel that they are battling against other real gamers. So, Hanna, the design lead, Kevin, the senior designer and I developed our logo carton - Martin into a media for this. It acts as the player's virtual face, improving their in-game experience and interactions between each other.

They also wished to have more appealing visual elements, inspiring animations and responsive feedback to gain more sense of satisfaction and competitiveness while interacting with the UI

As a strong startup, we made each design process to bring the most exciting and user-centered solution. To improve fan's viewing experience, we design not only in the office, but also with the fans during weekly inclusive "play tests" and public live concerts/events.
The pictures on the right were taken in a summer live concert in Westlake, Seattle. We demoed it to some fans there, let them play, and recieved valuable feedback. 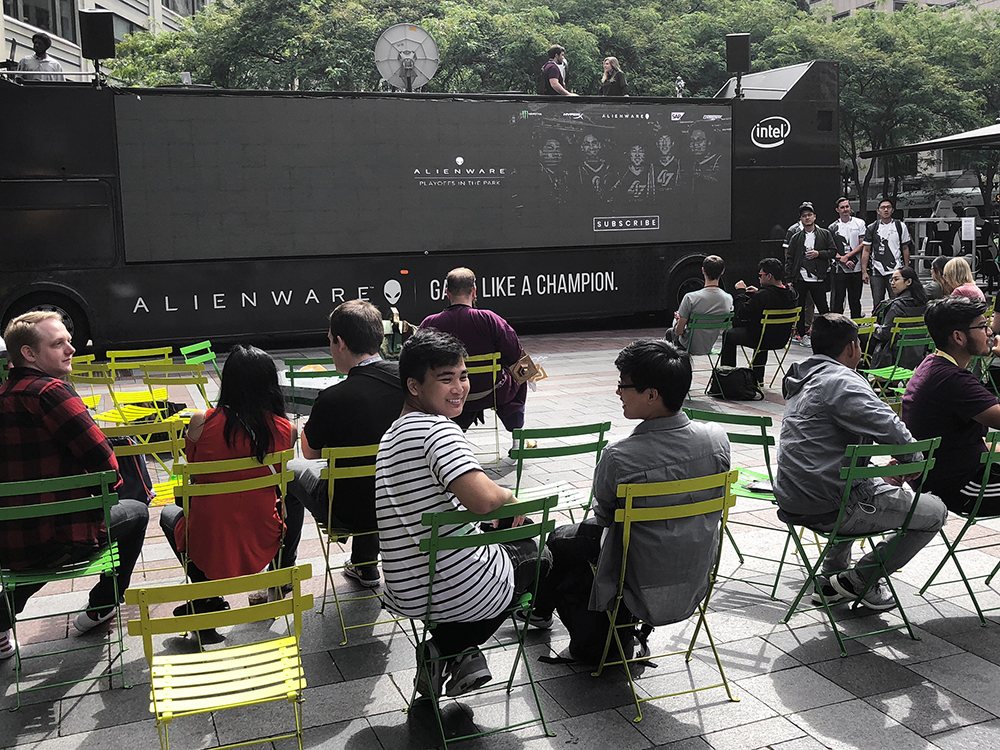 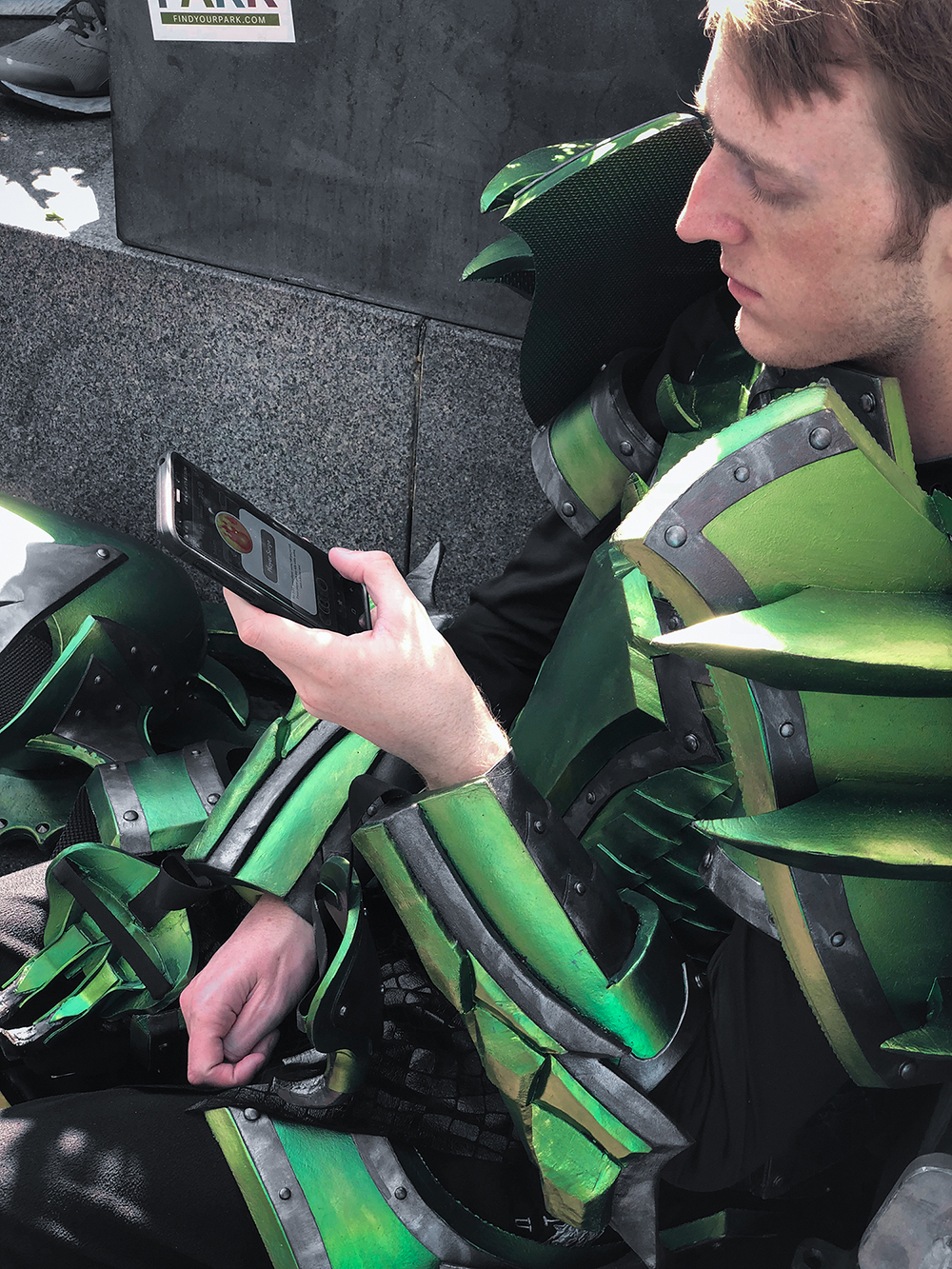 Taunt App: Game while watching live games among all fans in the world

Final Wireframe for the main UX 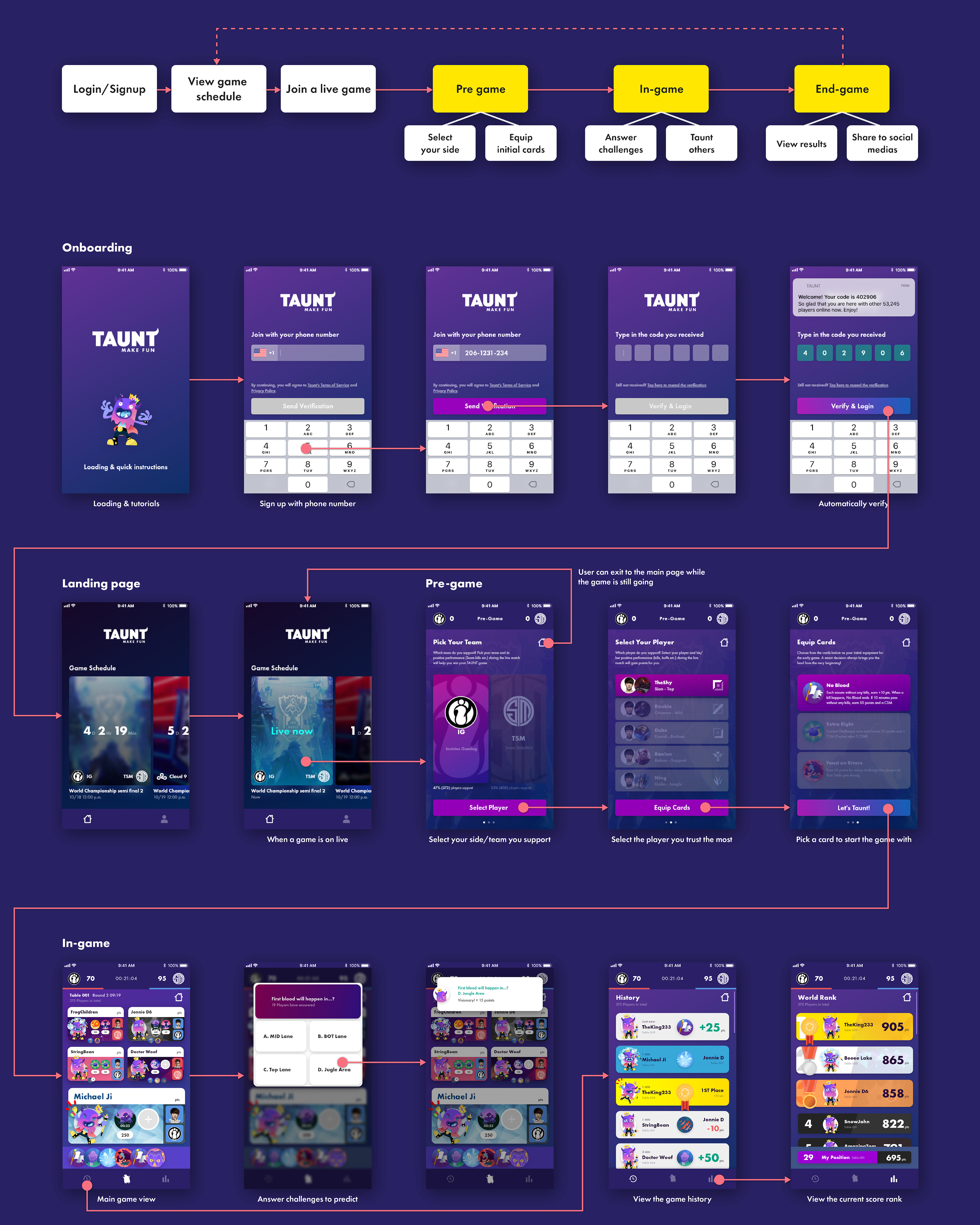 When a live E-sports game is on, a Taunt game starts, gathering thousands of fans all over the world into one battlefield happening along the game they are watching. Taunt creates an online mobile card game, allowing players to challenge others with their predictions of the match and the confidence of the player/team they trust. They can also use ability cards against others (Taunt cards) to gain even more advantages and prides! With it, the fans will be on the stage, enjoying the game, rather than watching in front of the screen only. To join the game, players will first pick their preferred team, players and initial cards during the pre-game session. Then, they will be divided into different tables for various rotating game sessions until the live match end. Whoever wins the highest scores is the winner!

Challenge other players by predicting the game

Answering pop-up challenges to predict the current game's status. The challenges are generated by our AI system monitoring and analyzing the live game and popular topics among players. Correct answers will increase the player's points and gift him/her with a bonus card -- which can help the player win the whole Taunt game even more easily!

Taunt other players!
Show off your power & battle against them

Like the abilities used in the live E-sports game, players can benefit by using "Taunt cards" in his/her deck to taunt and slow down other players. For example, the freezing card can freeze the player's interface, stopping him/her from gaining points or any other behaviours until he/she breaks the ice.

Play & win for your own future gameplay

Taunt is never an individual mobile game. For all the reputations and items you may win in a Taunt game, that sync to your account of the game you were watching & playing Taunt for. For example, if you are playing Taunt while watching a Fornite competition, you could win the bonus items for your Fornite account by winning the challenges in the live Taunt game!

Physical interactions:
Sync your excitement with the game's pace!

We want players to game for the game they are watching, and that never only limits on tapping on the cellphone's screen. Players actually want to control the game at some key, exciting moments, so we offer them an opportunity to imitate what the character is doing in the live match with gesture control UX designs.

Show off your domination in front of everyone!
The Spotlight Jumbotron UX Design in an aggressive style

To fulfil players' will to "be the best" and sense of achievement, there is also a big screen UX design aside from the mobile application. Such a screen will be projected in the public, for example, the offline match broadcast event. It will strongly show off players' performance along with the live broadcast going.

Quickly after the initial product was lacunched, I was given a mission to envision what Taunt App in the future should be based on the early users' feedback that:

I started with the Insights from the users

Cleaner UI and more playful feedback with the interaction designs

After several iterations within two weeks, I did an elevator pitch to the lead and CEO with a concise presentation and prototypes of my solutions. The deliverable won the team's and his heart and some of them got implemented immediately into the latest update. 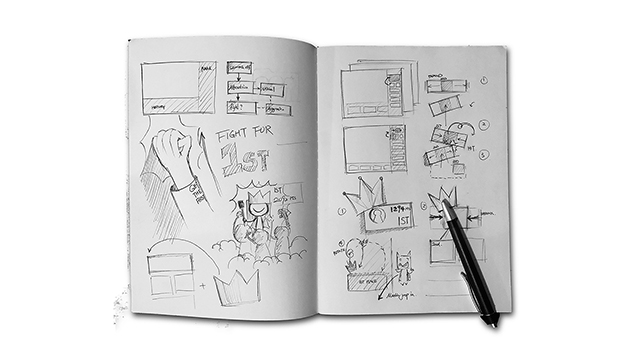 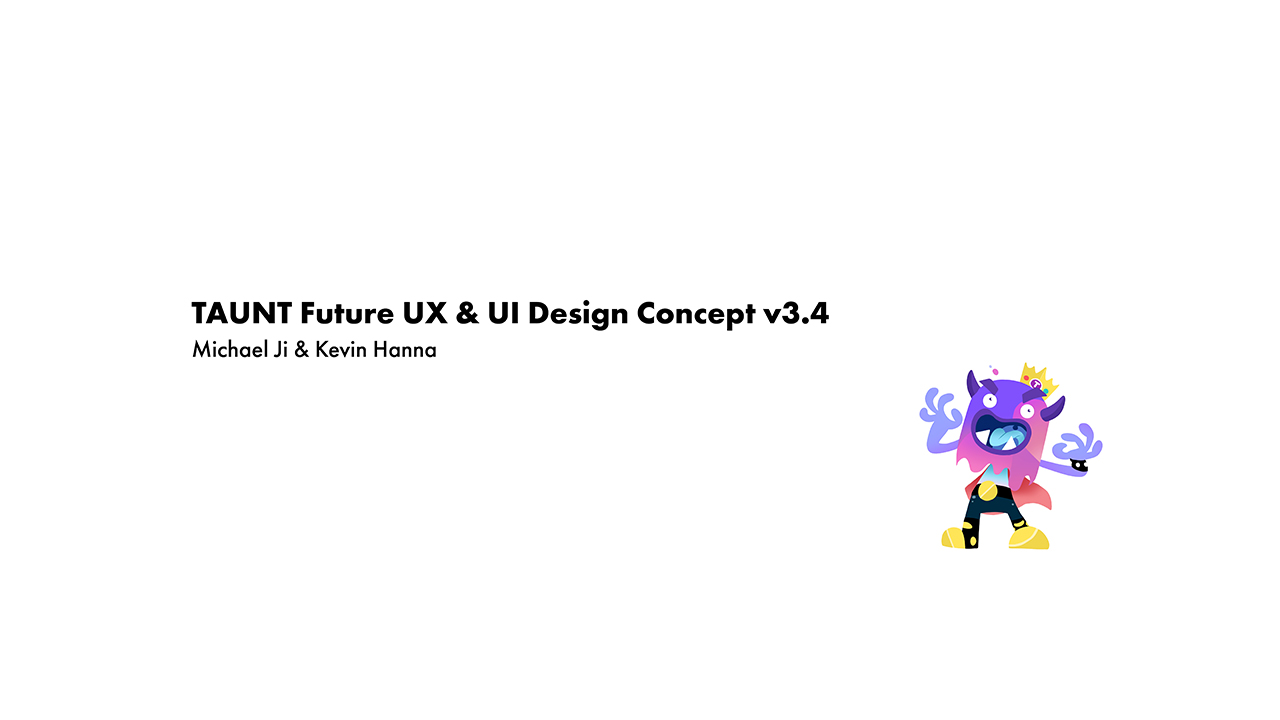 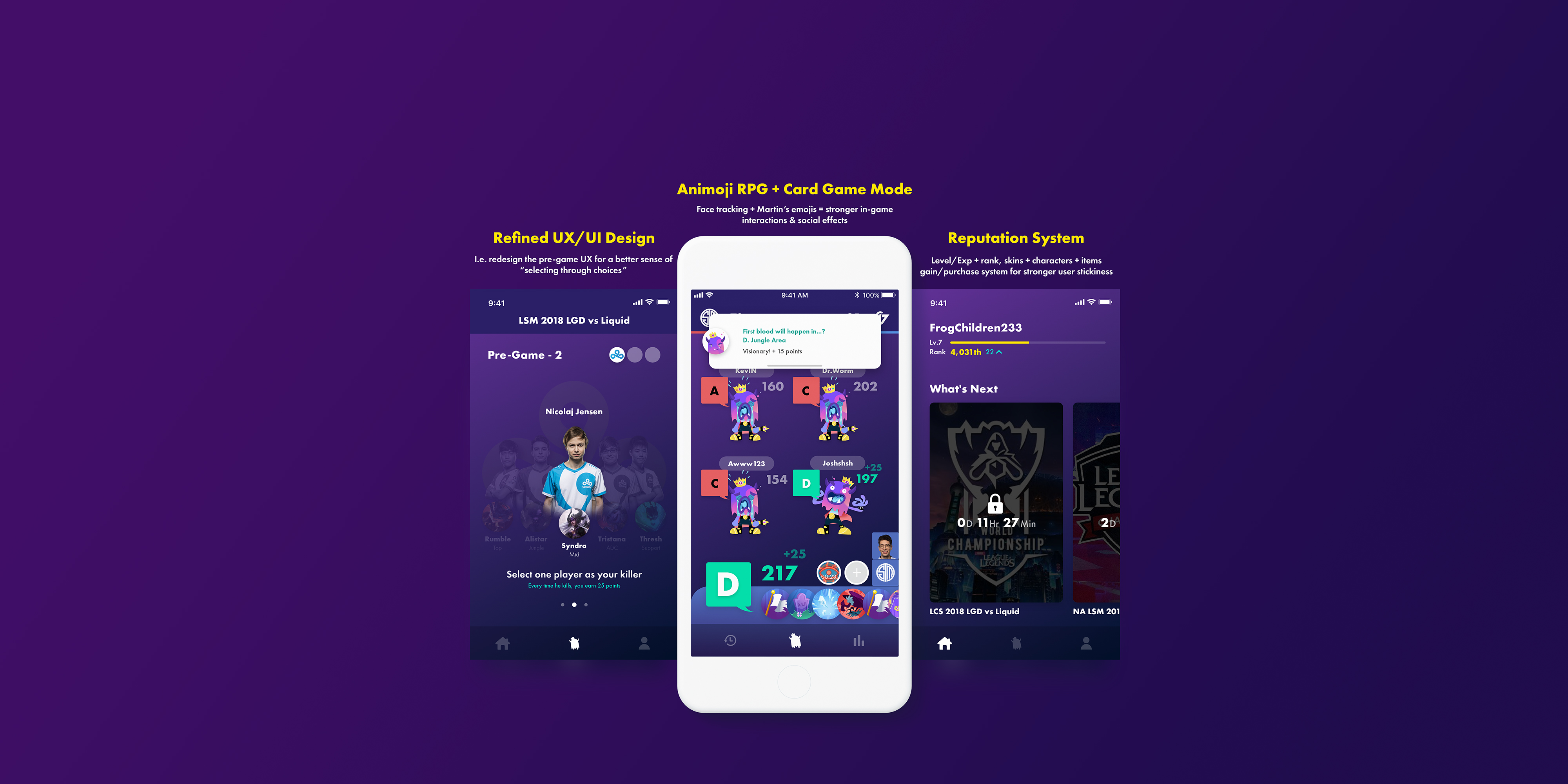 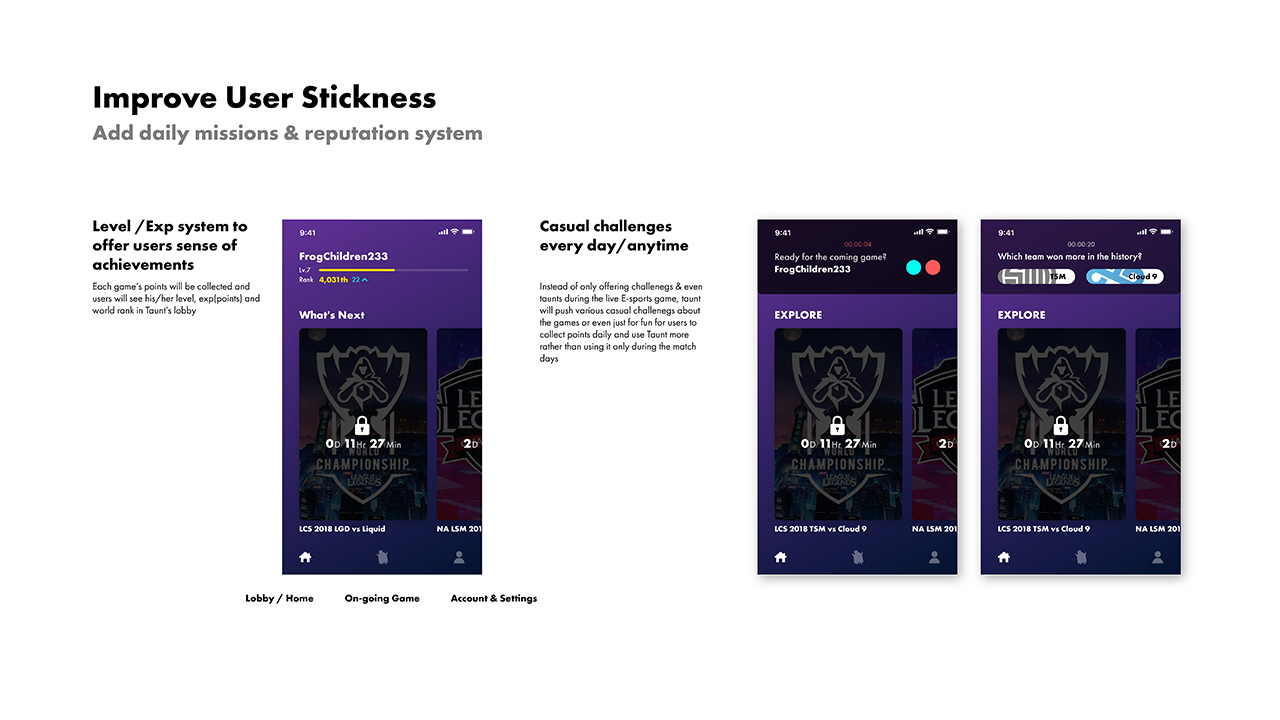 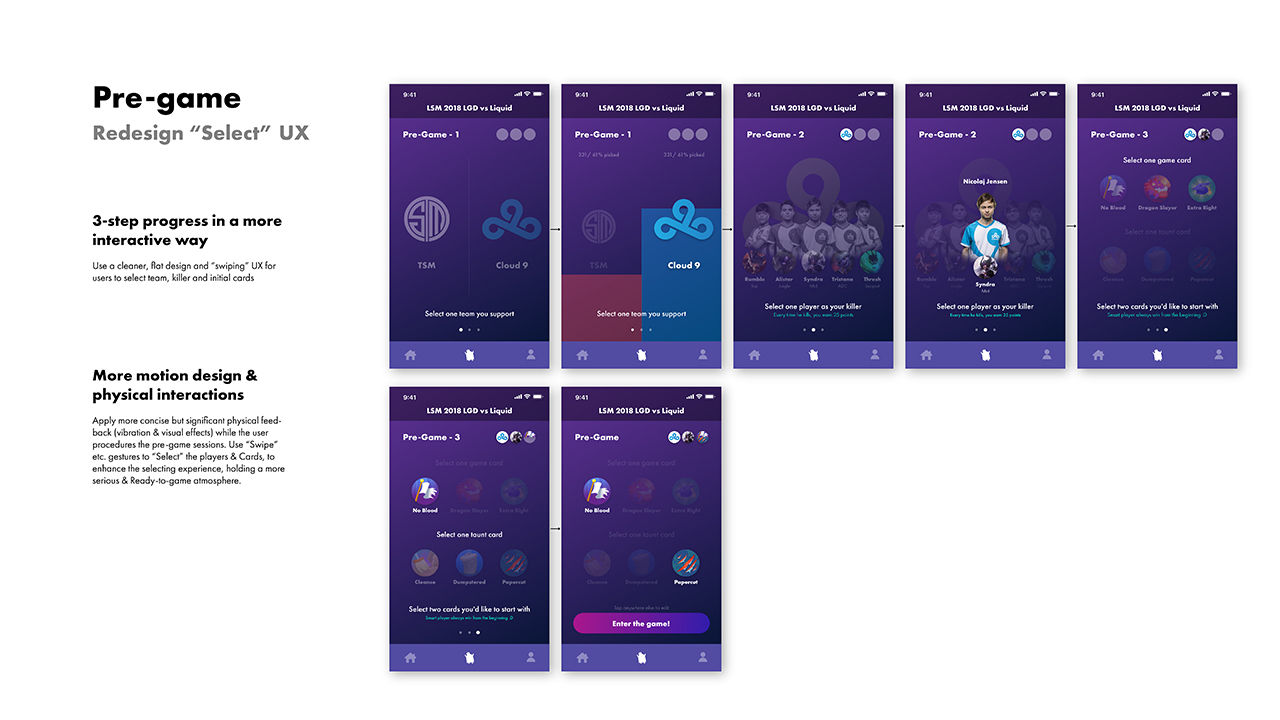 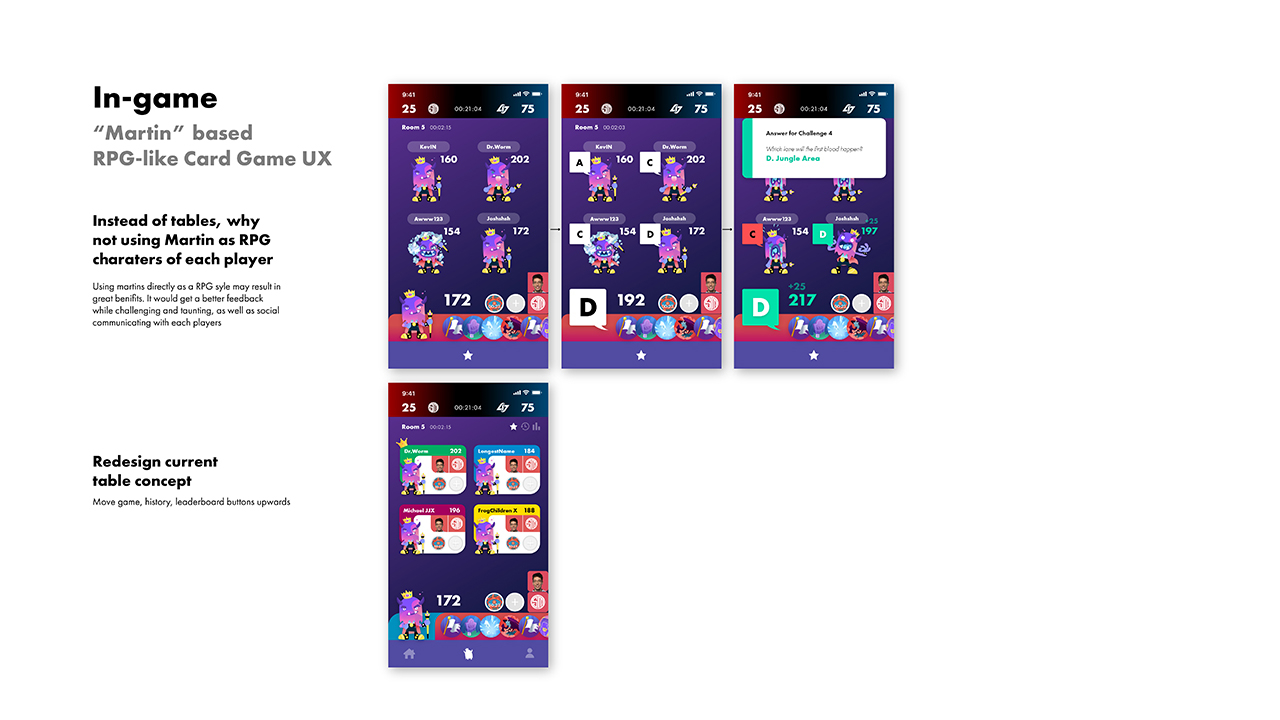 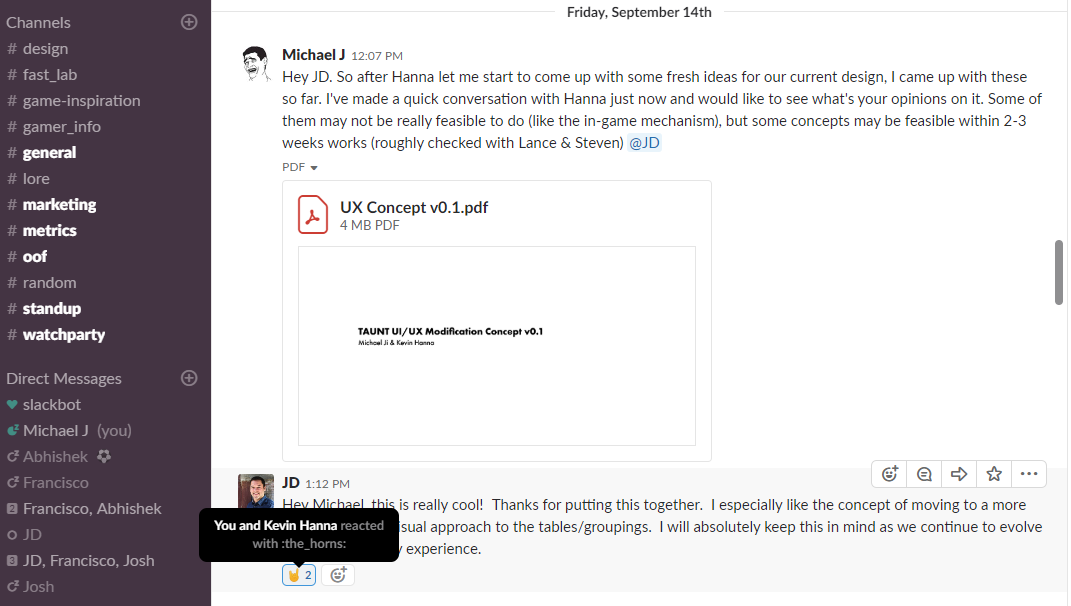 And it's exciting for me that the team was convinced by most of the feature designs and have implemented/started to implement them in the latest updates. For example, the reputation system and more interactive in-game emojis.

Launched the product with the team

It's exciting to see my designs were implemented and impressed not only my team, but also the potential users that joined our closed beta tests. In the end of August, 2018, we launced the first open beta version of the product. Though it was still on its early stage, it won a rating of 4.6 out of 5 and 300+ new users within the first four days. Also, we had it used by the fans during the actual live LCS-NA game in early September.

I was brought back by the team as a part-time UX designer after the internship. Just re-designed the official website to help launch the new product.

I loved the team and the products a lot, so did the team and the CEO. Thus, the team recurited me back as a part-time UX Designer to keep me working with them during my school days. We are developing and expanding even faster right now. Currently, I am re-designing Taunt's official website 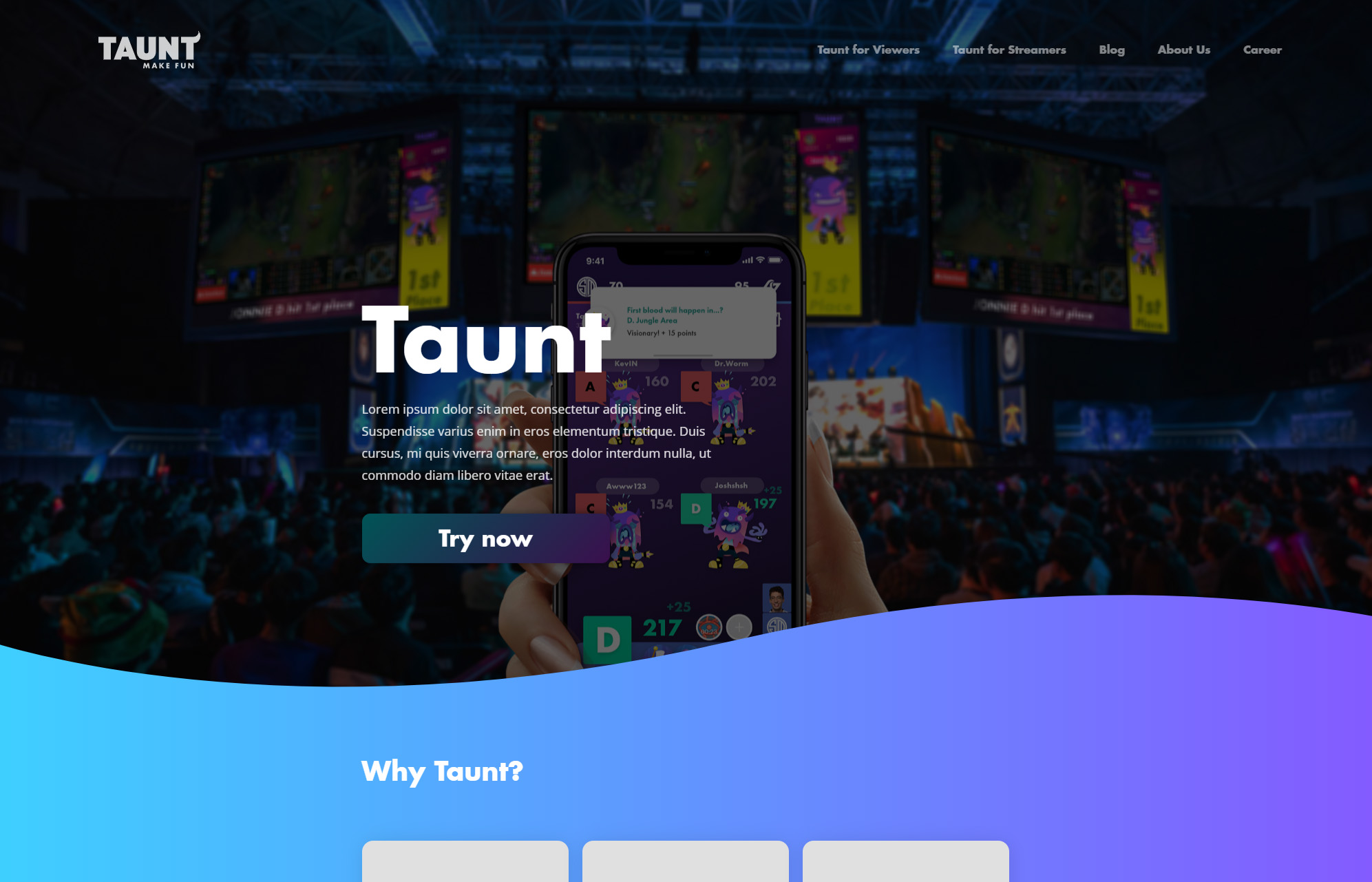 I learnt a lot form this fast pace startup development atmosphere. It was so educational that how to sync fast-pace iterations of the designing and building demo products with weekly inclusive user tests and the feedback addressed from them. Not only my skills were much more polished, but also the collaborations between those experience people and teams shaped me into a better teamworker, communicater, leader while pitching the ideas and, in deed, a designer that achieve a better balance between thoughtful designs and efficient feasibility.

The team is growing even faster!
We are designing for more scenarios now.

After successfully launching the open beta, the team has built more connections and collaborations with media and big game companies. Since then, Taunt has been known and growing even faster.. Check out one reviews on ESI and Forbes about my boss and Taunt (first time to have my picture on Forbes lol):