Walk! is a cross-platform app targeting at the youngs aged 17-25 who care about step data. It uses a chasing game mechanism to motivate users to workout more happily. By walking, users may win over others and customize virtual identities to self-satisfy.

Gen Z and Millennials always use pedometer Apps to support their walking habits because love being healthy with low effort. However, most of them dropped soon and returned to the bad habit of sitting still.
They gained no self-motivation or satisfaction with those Apps. Soon, they abandoned the Apps...
Neither the users could benefit nor the Apps could profit.

User-centered experience design which motivates the young to spontaneously walk

We recruited 11 participants to use 6 related applications, observing the use flows and collecting their feedback

84.6% of participants stated that they stop really paying attention to the pedometer application after 2 weeks' of usage

18.2% of users still use apps only displaying their own quantitative data, while 72.8% of them started to use various apps displaying their friends' status (or similar social features) too.

54.5% of participants use apps that can fulfil their demand for competitiveness and accomplishment (sharing their steps, ranking among friends, etc.)

When will they walk or run spontaneously

‍Hang out with fellows
Under supervised
Be chased by sth.
In a hurry to a place
‍

The kind of applications they spontaneously keep using

Design a step-counting product with an experience that fulfils users' demands for competitiveness/vanity in the exciting, motivating, convincing means

+ The forms of GAMES & SOCIAL NETWORKS could achieve these 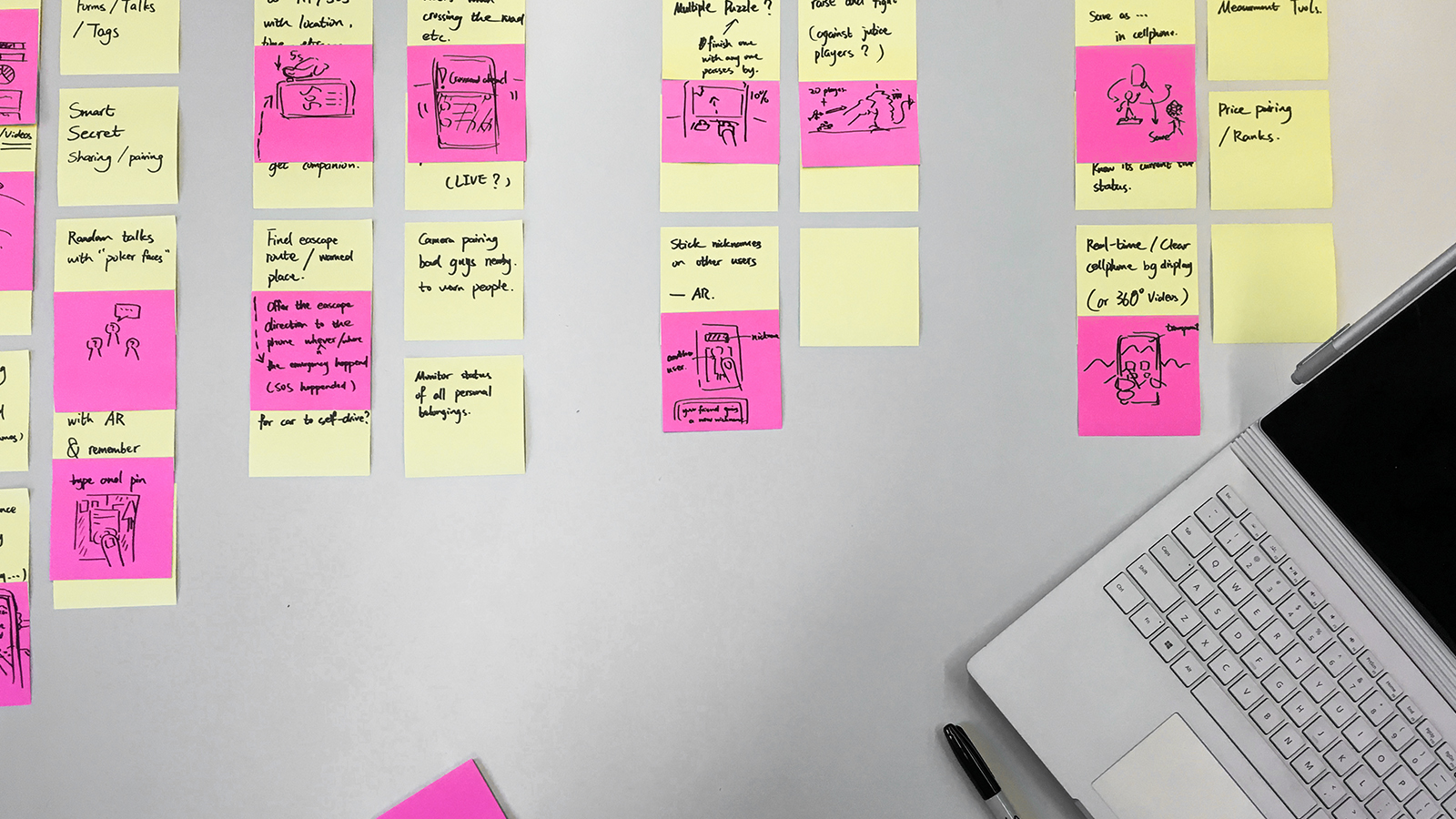 Based on the sights, I brainstormed with the participants, taking sticky notes to come up with as many as ideas that may be a good design for their desires. 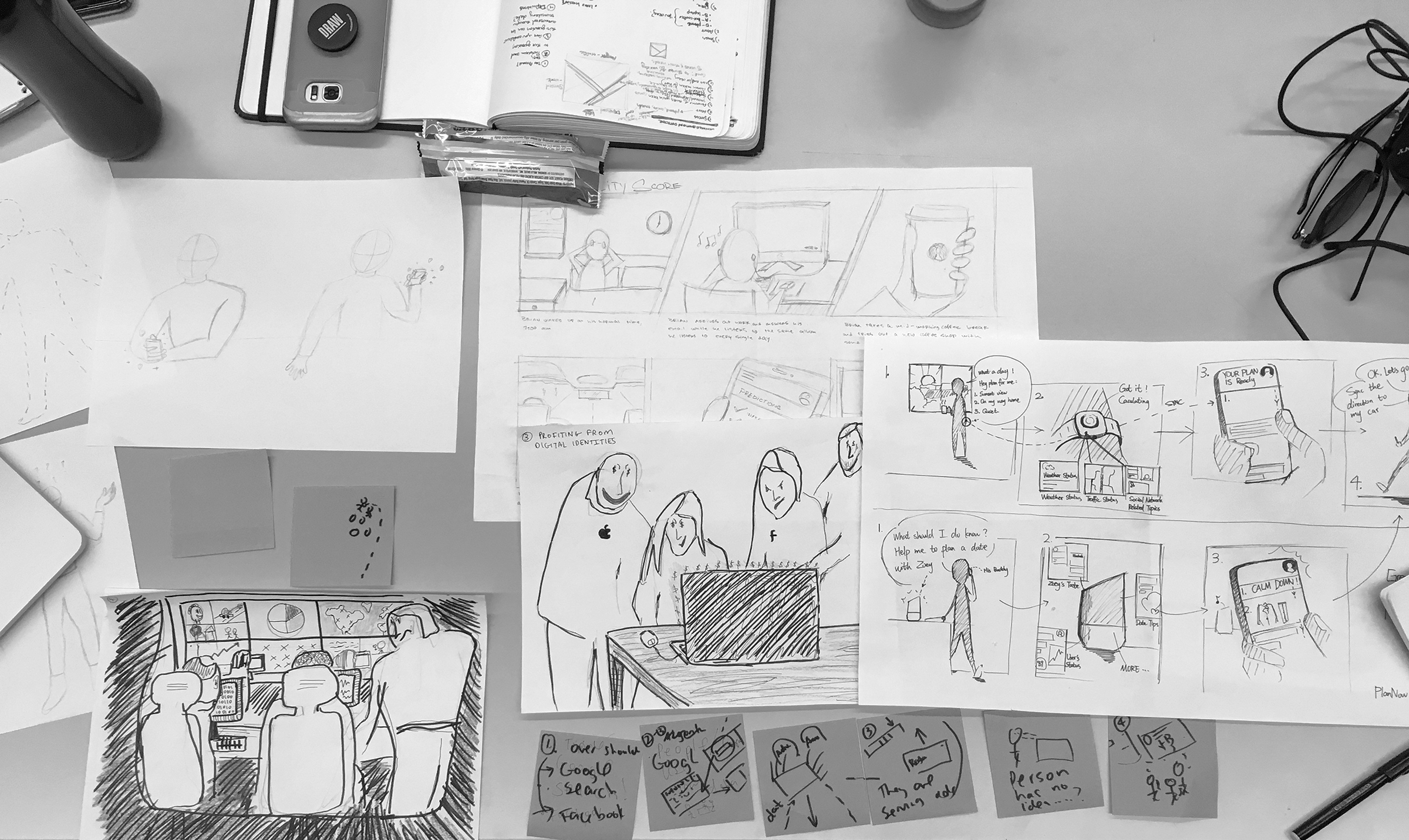 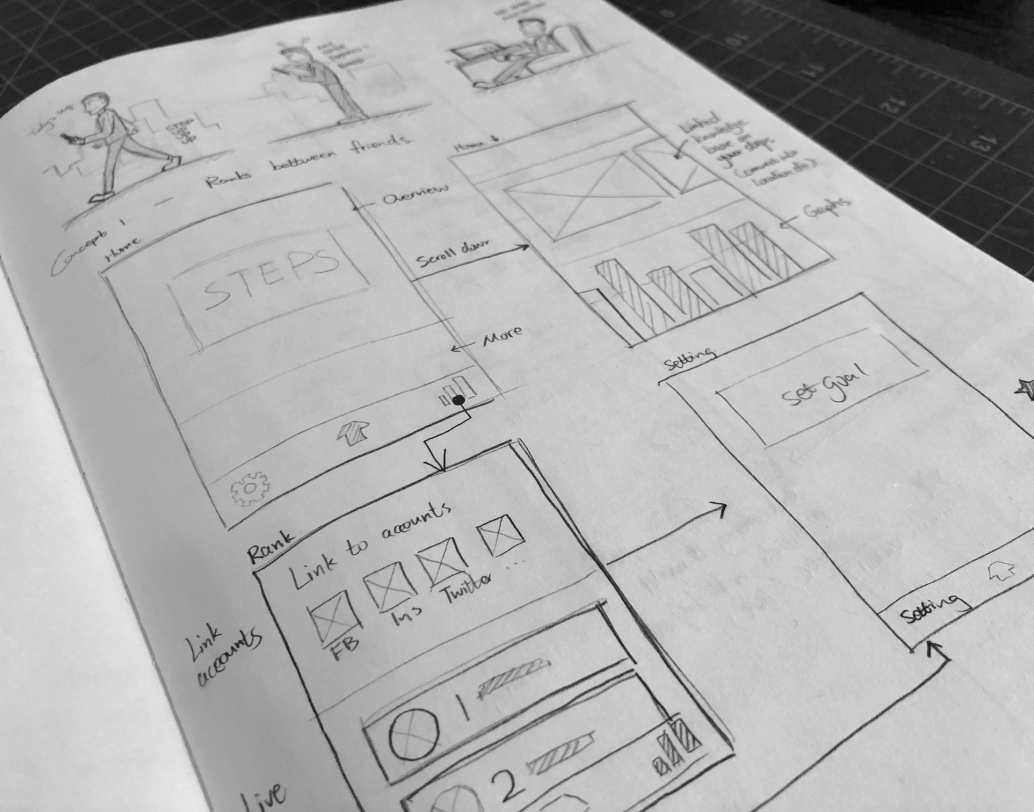 Narrow down to three initial variations

Based on the research insights and the feedback from professors, friends and my participants,  I narrow all the ideas down to three initial design concepts, preparing for the low-fidelity prototype and test iterations.

Featured with social ranking among friends from various social networks

A chasing game based on steps and altruism. Users need to walk and achieve step goals to survive from the poison gas chasing behind

A multiplayer ranked marathon game based on users' steps and demands for competitiveness. Whoever walks the most will win the daily marathon.

I recruited seven potential users (contacted via the initial survey) to test each. I let them card sort their preferred features, view storyboards and let them walk around and try with the paper prototype & screenshots sequence on the phone. Afterwards, I collected their feedback, suggestions and brainstorms. The results were educational. 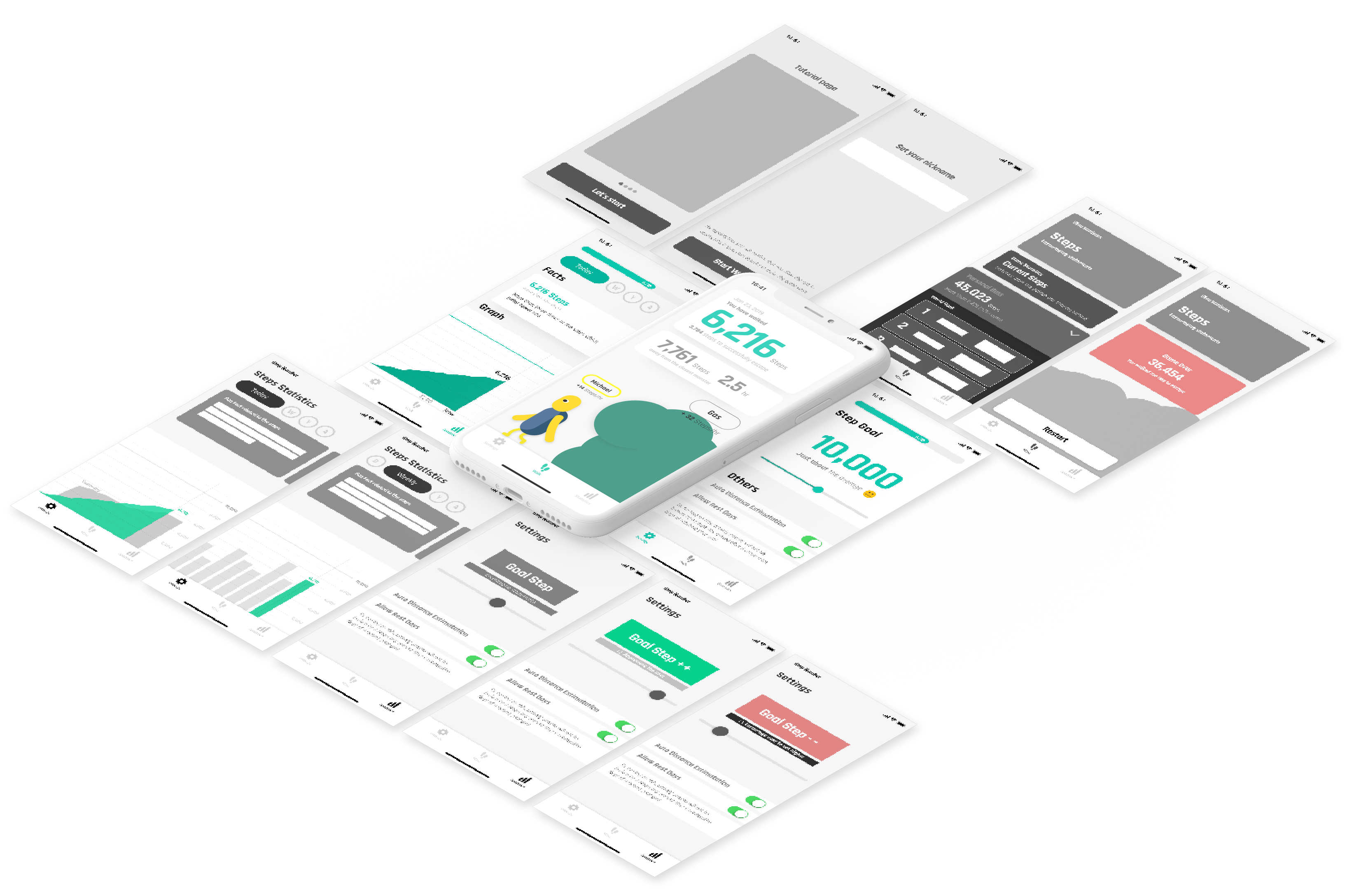 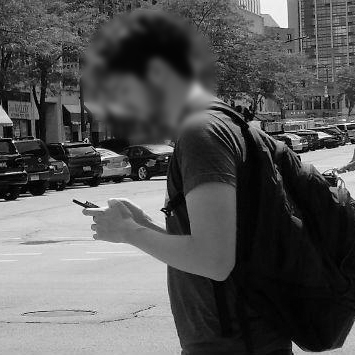 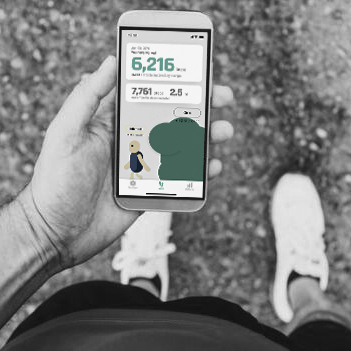 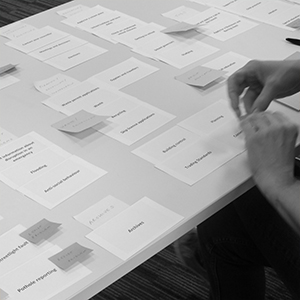 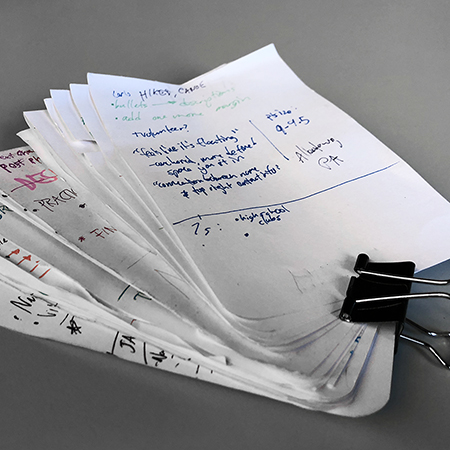 Tested with draft wireframe screenshots & storytelling, interviewed the participants & improved designs with them together from their perspectives

Insights from the test round 1

They love the chasing game more than Marathon game. They felt the scenario of "being chased by something" are more exciting and motivating

They wish to have more social connections within the game, as well as more motivation They suggested that I may combine some features

Insights from the test round 2

The concept of poison gas is somwhat too strong and serious, creating negative impression

They don't really check phones while walking. Meanwhile, they want to know the game status, missing no key moment

They asked if the games more controllable, interactive so that users could expect more possibilities while playing

Based on the feedback from the low-fideility prototype, I summarized my main mission for the refinement design iterations 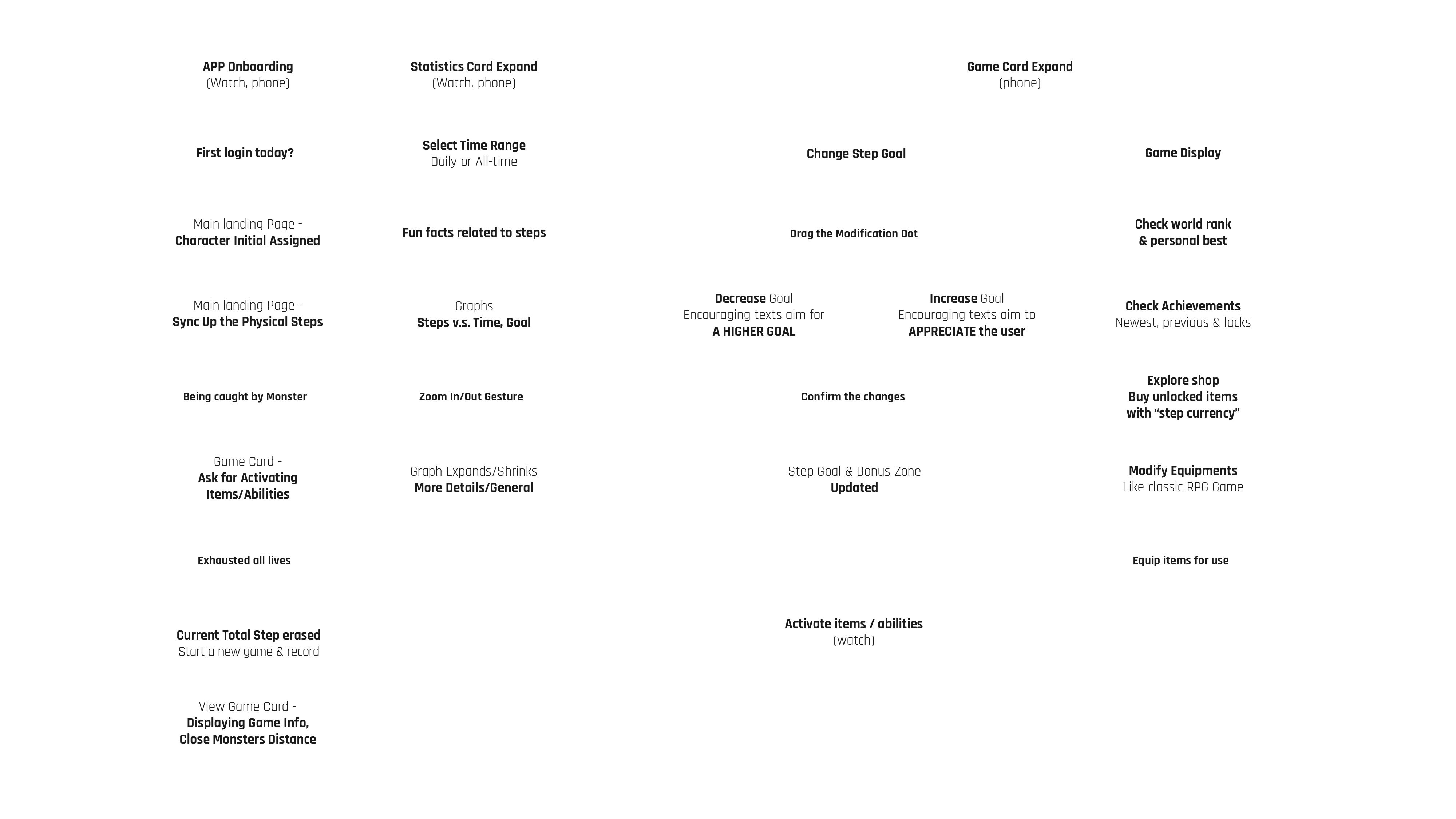 Traditional tab interface to the Card design,
Flatten down the simple layers, put more focus on the necessary info display 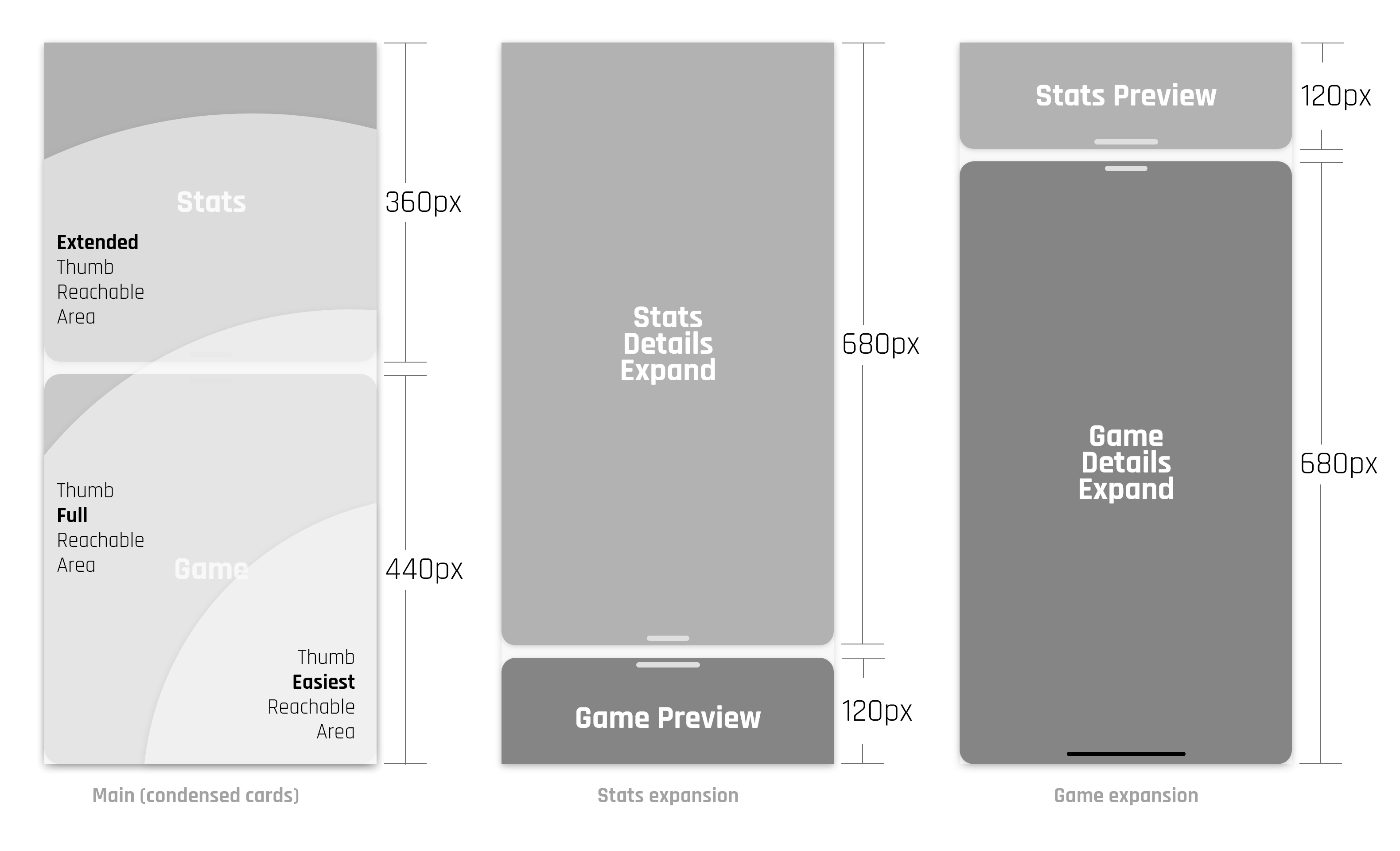 While designing for the final UX, I always took how easy the user can interact with the UI and the appropriate visual hints into considerations for convincing hierarchies. And that's why I designed the final interface into the "card-style" with dedicated setup after iterations. For example, as the game will be the main feature, I put the game card at the bottom with slightly larger area, where the users can access more easily and frequently, while the stats card is on the top but still accessible.

The selections were inspired by what the participants were interested in with the low-fidelity design. Cyan means casual, innovating while green means health. I chose the colors between these two to express the exciting concept of the application: using the game to motivate people to keep good healthy habits. 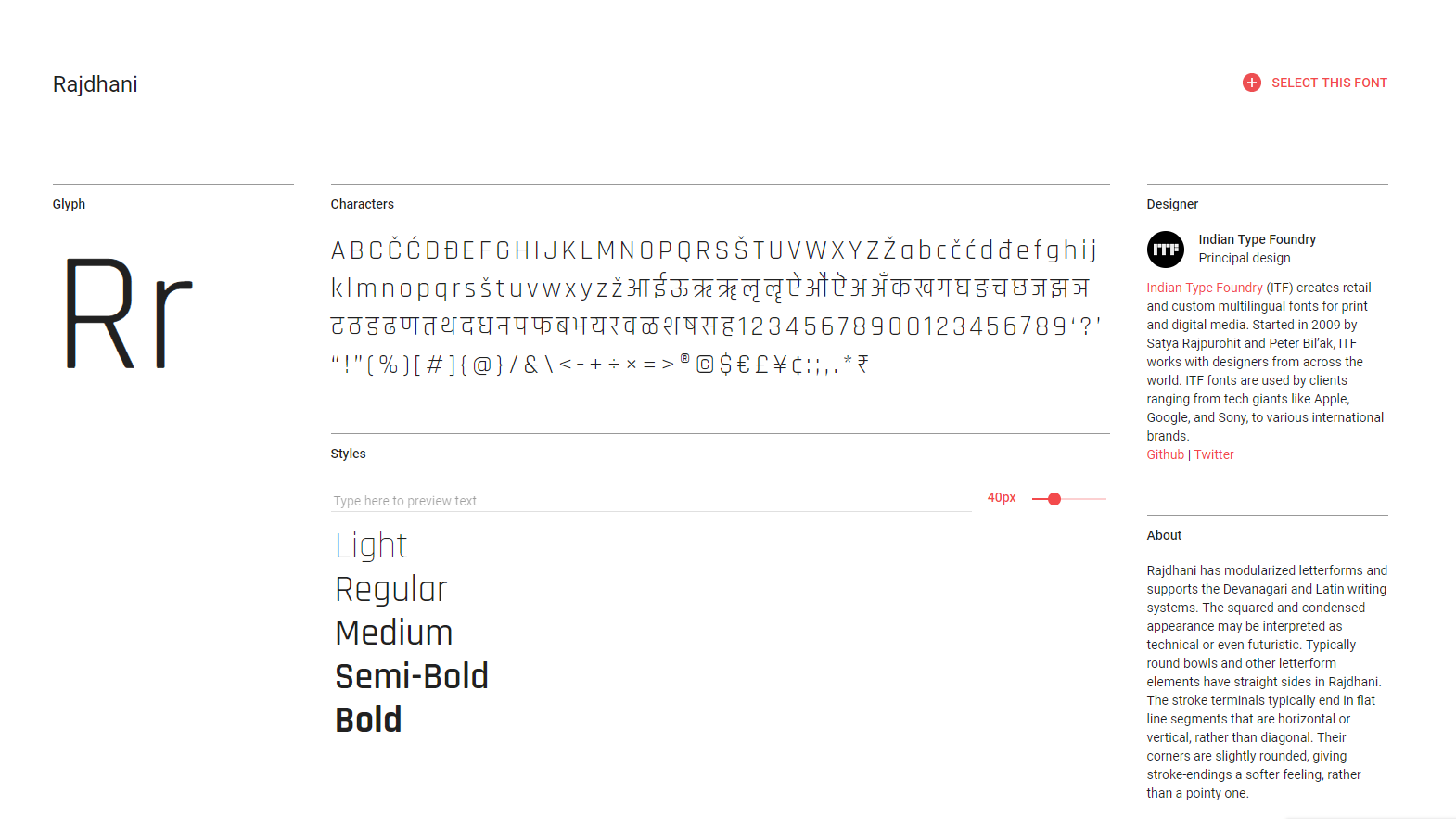 Cute, playful & Techanology
‍
As the concept of the game is both cute and competiting, I looked for fonts that could be both cute and "tech-feeling". This font has both cute curves and straight edges, making it my first choice in the end.

Walk! is a game that targets at the young aged from 17-25. Based ib the research, cute visual languages are more appealing to them. Thus, the visual language of the UI elements uses rounded rectangles and circles to create the users a cute, friendly, casual and playful atmosphere.

Easier accessbility of data and game control for the users

Clean UI and big fonts for easy readability while walking

Iteration 1 - 2
With these in mind, I started to design the Watch UX Iteration 1 after some initial sketches

Then I tested the wireframe with five participants. However, they felt the UX was a little complex. They prefer something more readable UIs, concise UX and fewer layers. Also, they prefer notifications to notify them of any in-game key moments

Based on the feedback, I replaced the full card design, as what it was used in the mobile design, with more clear, big buttons for users to interact with the interface more easily for the size of watches. Also I included the notification feature, getting users involved into the game easier.

Godzilla + Minions for as an appealing focus for the young;
Natural walking animations with dedicatedly delayed(2fps) motion designs. 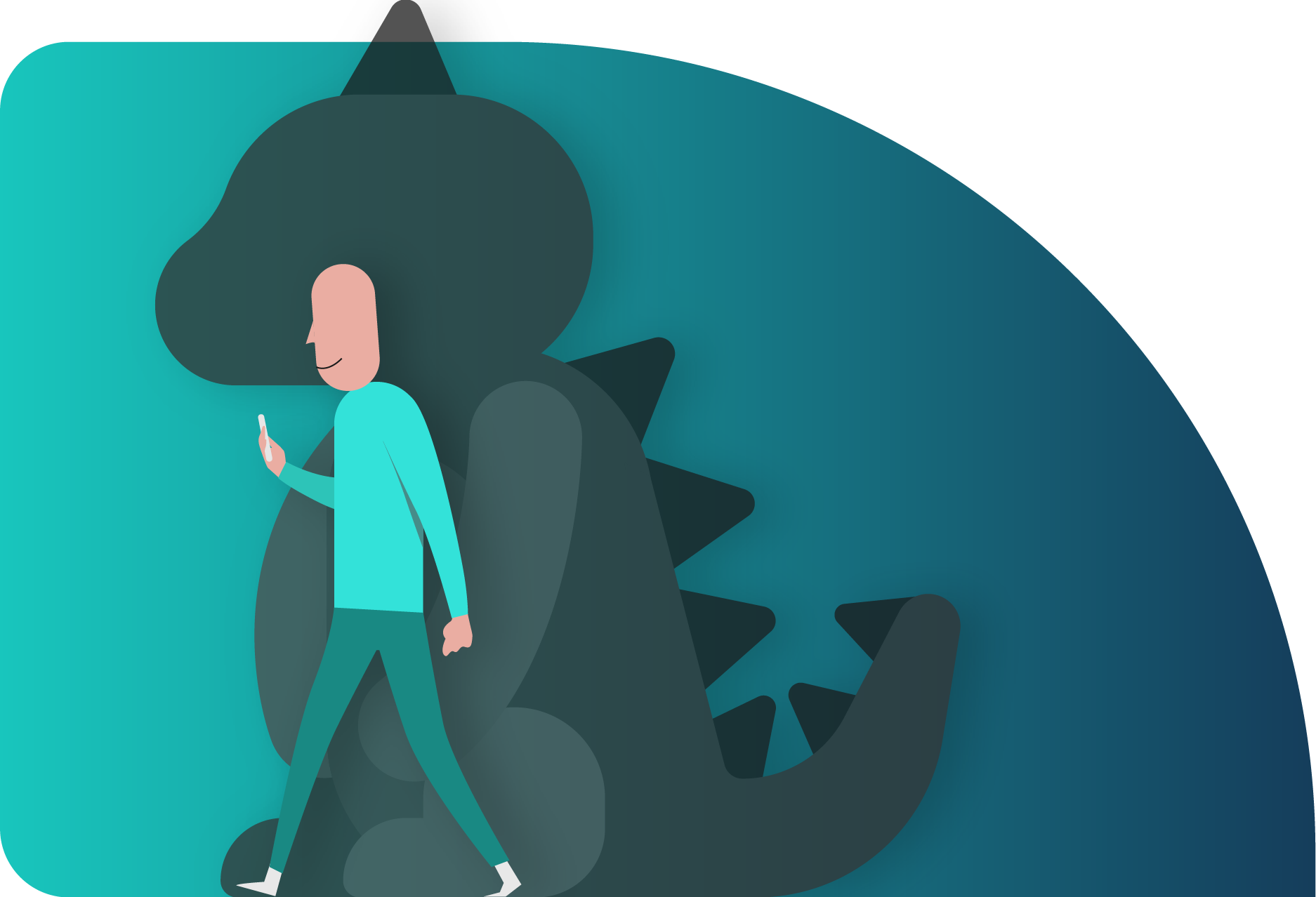 A chasing game between people nearby on your steps! You may be the Escaper, or the Cute Monster.

You can also redeem items, skins to empower your virtual identity!

As an escaper
Walk to escape from monsters. For each game, whenever you are caught by a monster, the game ends. The current step and rank info will be recorded and reset. Every day, if you hit your daily step goal, you won't be caught by any monsters who set lower goals. However, be sure to set a higher goal. The lower goal will not be able to protect you forever and higher goals can bring more bonus.

As a monster
your job is to walk as many as you can to catch the escapers - they are the source of your strength. You strength will be exhausting during a day, and if you have not caught enough escapers, you will be really starve and become the escaper. The more you caught the bigger you will be, and you will be ranked higher.

Everyone escapes, everyone chases, everyone ranks. However, you only have one single chance to hit the highest steps before being caught. Walk! use its unique game mechanism to bring social connections and motivations to the users. In the future, users may even explore their social networks with walking and meeting other players. 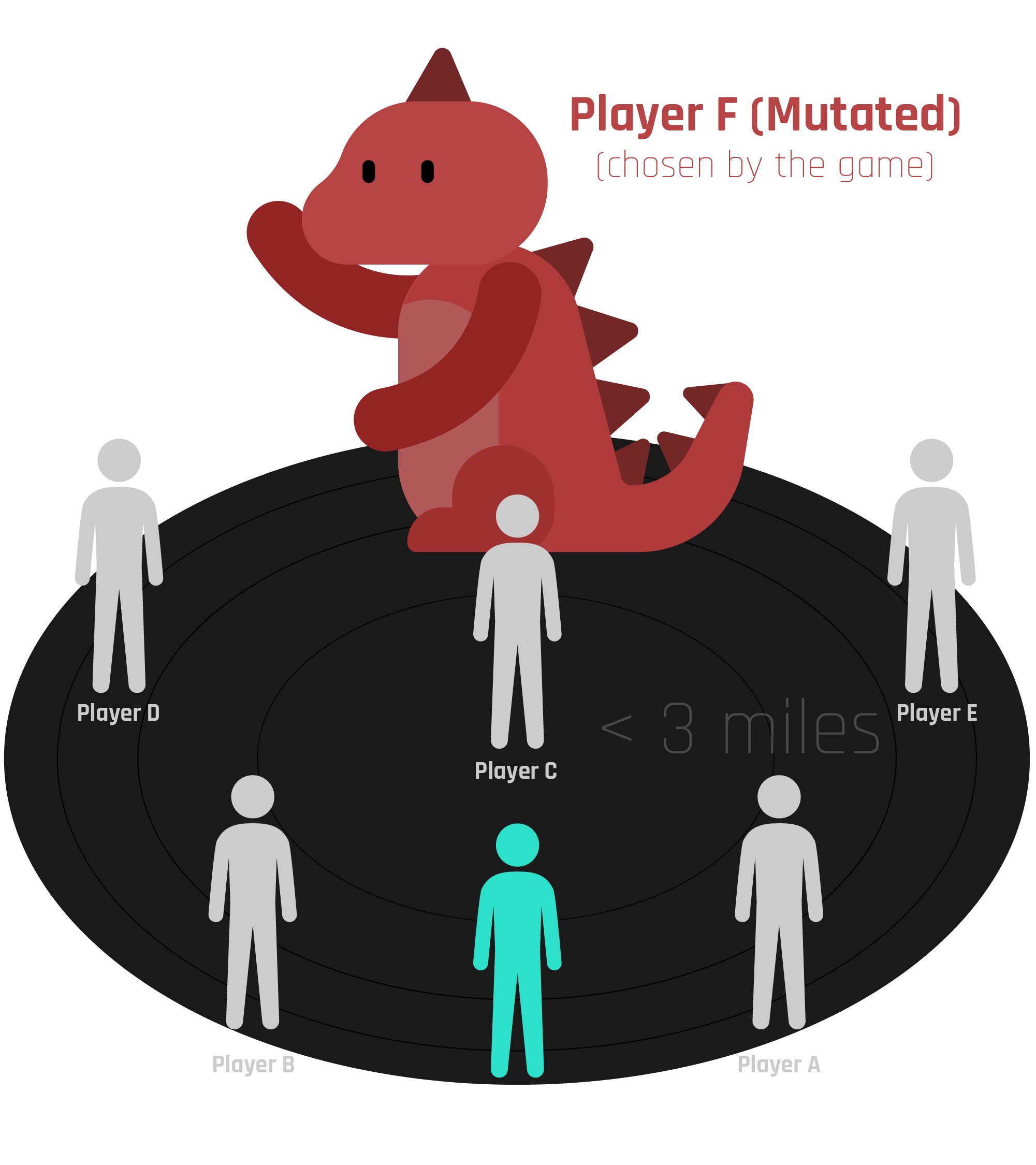 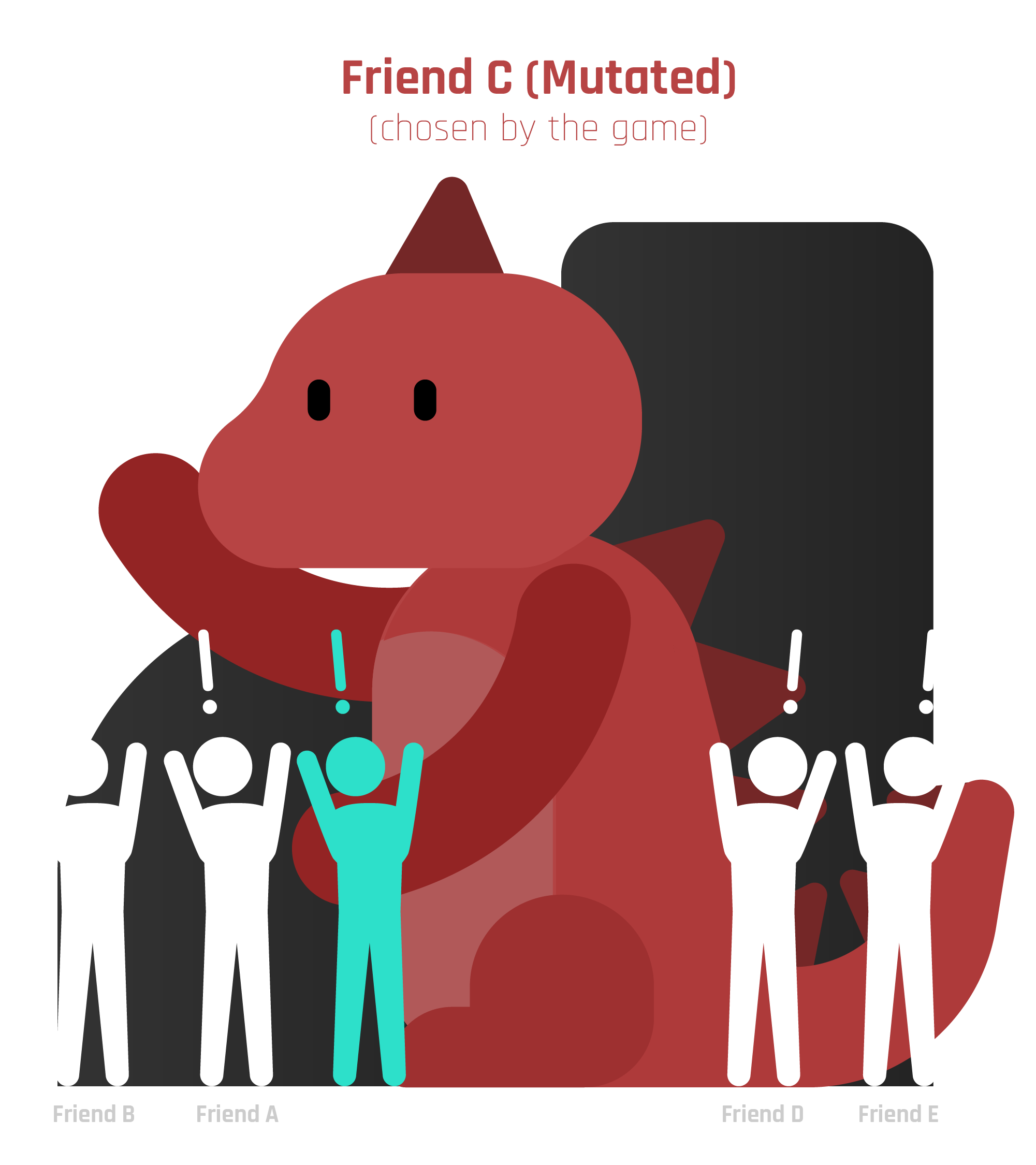 Use Walk! alone
The chase will happen between all users within 3 miles. Daily, 1/6 of the users will mutate into the monsters while firstly launching the app. If two escapers pass by each other coincidently, one of them will suddenly mutate into a monster, starting an exciting instant chase between them.

Use Walk! with friends nearby
While hanging out with friends who also use Walk!, something interesting will happen. At one moment, one of your friends next to you will suddenly mutate into a monster, and a chase game between your group will happen immediately

The systematic design across "devices"

Based on the modified game design with the reputation and collection system, the final flow and prototype were shaped like this. The primary goal of the design was to encourage people by earning the sense of honour and fun to fulfil their vanity. Far from onboarding sessions, I aimed to make potential users think beyond the "step counter" or "health care app". Instead, I branded it with an attractive online game simply controlled by your feet.

Click to view the pdf file of the flow 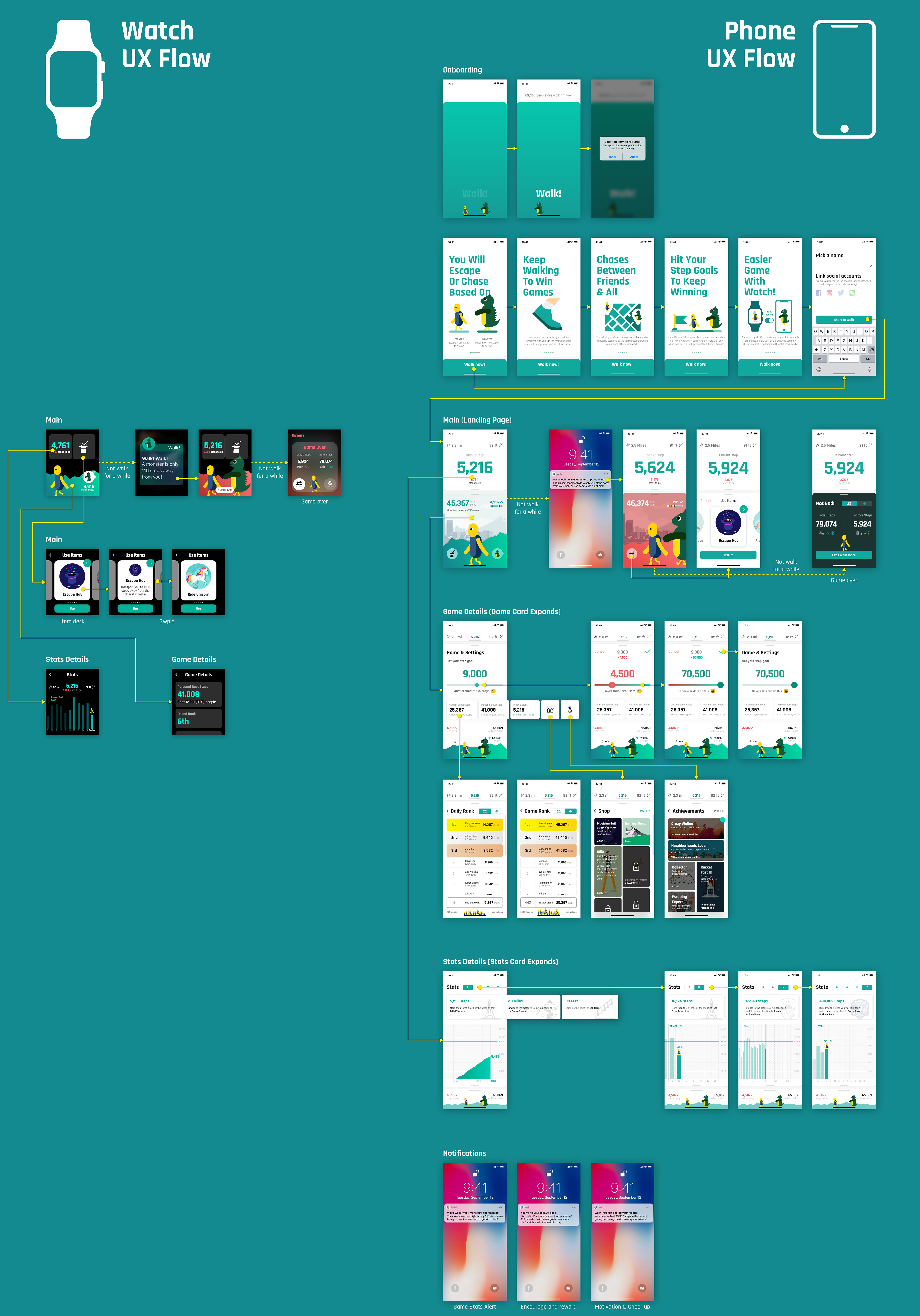 Besides the game mode, potential users have stated that they prefer more side encouraging mechanisms that help supervise and push them to set higher goals and reach them.

Meanwhile, users can benefit more for their current games by setting a higher daily goal and reaching it.
For example, every day the escaper players who reach their goals can avoid being caught by the monster players who have lower step goals.

Attempt to implement  & launch the product as a start-up project

Soon after this project was done, I had a chance to pitch my design to Valve. The designer in that pitch told me that he was really excited about this project and suggested me to try to implement it. So I later pitched it to two of my SDE friends. We then spent 2.5 months in the end of 2019 to refine build it. However, the process was paused because of technical barriers, lack of budget & Covid. The implementation was much harder than we thought before.

Yet, we never truly gave up.

The safety concerns, the public responsibilities & UX design for the game.

Probably integrate with Web 3 & NFT concepts, as well as social impacts to bring more meanings to "customizing your character"